UK indie music veterans Comet Gain keep coming back for more. After 20 years and now seven albums this band of revolving musicians based around the songwriting of David Feck, remain one of music’s unknown treasures. 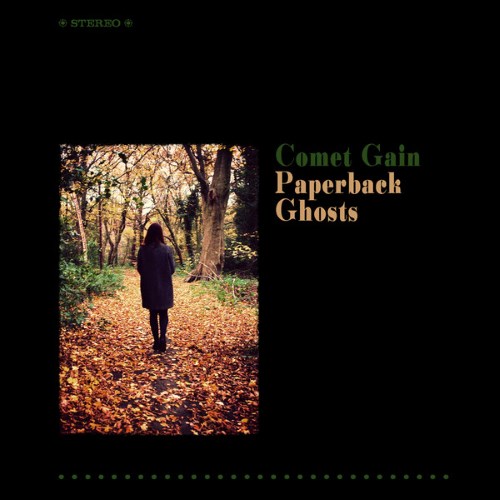 Set up among the centre parted hair and guitar twang of 1990s alternative acts like the The Blue Aeroplanes, Feck has continued where others have stopped or settled into the retro trail. He’s also still full of enthusiasm for Comet Gain and on their previous album Howl of the Lonely Crowd Feck even got to work with one of the alternative pop legends that influenced his work, Edwyn Collins, who produced much of it.

On their latest album the results are once again superb but once again will go largely unnoticed, which is a shame as it is full of wonderful indie pop, especially on openers ‘Long After Tonite’s Candles Are Blown’ and ‘Sad Love and Other Short Stories’. Wait ‘til December is another highlight, offering a lovely musical autumnal stroll in the park, for those like me who in the early 1990s listened to Teenage Fanclub’s December on their Sony Walkman while the brown, dry leaves of autumn rustled underfoot.

But there are flaws. Among Paperback Ghost’s assembled band is Rachel Evans, whose vocals provide the C86 Tulullah Gosh influence but sadly bring down the quality. Comet Gain’s big attraction is Feck, his lyrics and vocal delivery. By handing out lead vocal duties to others like Evans  the quality is diluted.  Her lead tracks such as Far From the Pavilion are weaker and could be the product of almost any other aspiring indie band.

Nevertheless this communal approach  is part of Comet Gain’s sound with Feck’s desire to share the limelight suggesting a welcome lack of ego, that while commercially suicidal indicates he’s probably a nice guy to be around.