The term “Cameron’s Britain”, with all its echoes of “Thatcher’s Britain” is not used nearly enough to describe the inequality and greed that has been seeping out of government since 2010. Step forward Evans the Death to put that right, with the term proudly used on their press release for their latest album Expect Delays.

Its used  here to describe the band’s last three years “eking out an existence on the poverty line” through a succession of minimum wage jobs and benefits interviews. Its a grim existence that thousands of young people can sadly associate with.

As if tackling poverty line Britain wasn’t enough for this London four piece there has been further upheaval over the last few years. Chief among those was the departure of Alanna McArdle to Joanna Gruesome. Now with a slightly rejigged line up, that includes new recruit James Burkitt on drums, they are back to make 2015 hopefully a far better year both musically and politically. 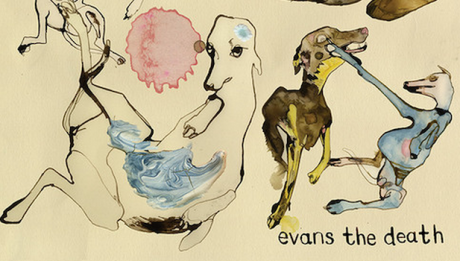 Sometimes adversity can bring out the best in musicians and that’s certainly the case here with the backdrop of upheaval and despair creating a powerful album, full of frustration and anger. Lead singer Katherine Whitaker’s folk punk vocals are on particular top form, whether on one of the album’s low key acoustic moments, such as on Intrinsic Grey, or epic punk numbers like Enabler, she sounds like she means every word and is living every emotion. Enabler in particular is a fearsomely good track, with more than a nod to Swervedriver as it motors across its three minutes.

There are echoes of the similar C86 path that their contemporaries continue to tread, but there’s a raw power to the production here that gives it a far more attacking feel. Even the jangly guitars and Blondie-esque feel of Sledgehammer sound angry and menacing.

It’s this edge that will possibly prevent Evans the Death from garnering too much radio airplay. I hope I’m wrong there because as well as attitude this has some great tunes. Sledgehammer and Enabler have a timeless classic indie single feel to them, emerging here as modern alternative pop anthems for ‘Cameron’s Britain.’