One of the standout tracks on Fika Recordings superb free advent calendar give away of songs in the build up to Christmas 2011 was Sandwich Day by Owl & Mouse. This beautiful song perfectly encapsulated the lazy, cosy feel of a relaxed Christmas, thanks to the vocals of the band’s lead songwriter Hannah Botting. She’s a future star of indiepop but perhaps is yet to realise it. 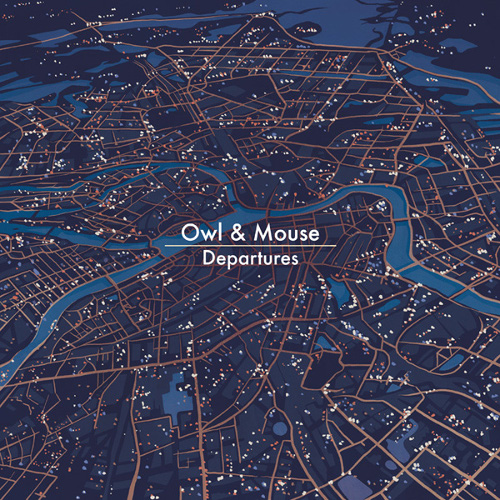 A reasonable point of reference for Owl & Mouse, which also features Hannah’s sister Jen, Dan Mayfield and Emma Winston (Enderby’s Room) and Tom Wade (We Aeronauts), is Allo Darlin’. It’s a comparison Botting clearly dislikes, saying while “very flattering” it is “not very accurate in my opinion”. But with her soft Australian vocals and the predominance of ukulele it is a likeness that serves a useful purpose. If you love Allo Darlin’, whose bassist Bill Botting is Hannah’s brother, then you are likely to find a lot to like in Owl & Mouse.

As a debut album The Fika Recordings released Departures gives a good account of the band and shows the indie pop buying public what an asset to the genre Botting is as a vocalist and lyricist.

Production wise there’s a really strong start with Keep Your Eyes Open Wide, which features some lovely synth work from Winston that perfectly matches Botting’s vocals. Winston and Botting’s combination is a real strength in the band that is exploited well here.

There are other strengths too. The combined vocals of the band, especially the baritone of Wade work really well. Sick of Love is another strong track, with guitar added to the mix and the vocal arrangement on Misfits is wonderful.

There are trumpets too, which are used well on the album’s title track, and the sad love song Canvas Bag, which emerges as perhaps the album’s best track. Guitar from Paul Rains, of Allo Darlin’ helps this song.

But the album doesn’t always play to these strengths and it seems to fall back into the band’s comfort zone at times. Too often the ukulele is at the fore, at times unfairly muscling out Winston’s wonderful keyboards.

There is a need for a slight, intimate sound. Botting sounds like she’s confiding with the listener so the bombast of heavy electric guitars and pounding drums may seem out of place. But the focus on ukulele feels a little too comfortable and unambitious at times. This is a band that sounds like they have outgrown the ukulele but can’t give it up, like an early teen with a childhood teddy bear.

Take Octopi. The trumpets here sound great, but Winston struggles for attention over those bloody ukuleles. This also happens on Worst Kiss, which sounds like a demo of what could be a great song.

As a fan, reviewer and listener I’d like to see more ambitious production with far more synths, more vocal interplay and far less ukuleles. Until they truly find their voice, play to their strengths more and ditch those bloomin’ ukes those unwelcome comparisons with Allo Darlin’ are likely to continue.