Those pesky left wing kids may have put the brakes on a Conservative landslide in this month’s general election but the forces of right-wing evil are not beaten yet.

Over in the US Donald Trump continues his crusade against the left, the media, Muslims and the Constitution itself.

Back in the UK the left’s party poppers are also on hold, as they await details of an arrangement being brokered between the minority Tory government and the UK’s very own Republic of Gilead – Northern Ireland’s DUP. 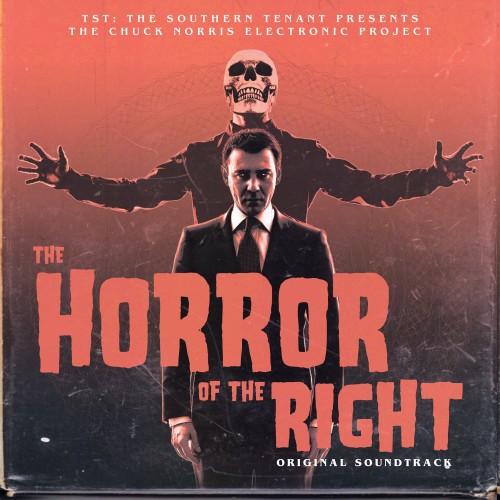 Before delving into the bleeps and squelches of this release let’s backtrack a little to that previous movie star theme 2015 album. Its central premise was to take the titles of right wing action star Norris’ movies to tackle issues such as the emerging alt-right, US gun laws and racism. It worked and treat and so too does this.

Since Trump was elected I’ve found myself drawn increasingly to early 1980s punk music, with that era of Ronald Reagan and Margaret Thatcher encapsulated by the likes of the Dead Kennedys. This album, which evokes the gloriously ominous soundtracks of John Carpenter, can now be added to that list of retro themed reactions to the new, emerging right.

Even the title, The Horror of the Right, is a nod to that era, based on a 1981 b-movie set in the year 2020 about a world dominated by an evil business corporation intent on crippling the working classes for good.

Among highlights are the versions of The President’s Men and Delta Force, which both conjure up particularly frightening visions of a right wing takeover.

Called Southern Tenant, this synth off shoot of comprises STFU’s Pat McGarvey, along with Steve Ironside, to create a genuine sounding 1980s horror soundtrack as well as a musical backing of our current, still troubled times.

For more information about The Horror of the Right visit here.

To hear a stream of the album visit here.