Our big green friend, the Green Man Festival, never disappoints and once again provides one of the best festival weekends this side of Pluto.

As always the depth and quality of performances was magnificent, with nary a dud in evidence. The oh-so unpredictable Welsh weather remained the right side of sub-Arctic, and on more than one occasion I spotted people applying sun tan lotion. Yes, suntan lotion! Not something I can remember ever seeing in Wales before.

Arriving with the dawn on the Friday via a breakfast at Waitrose in Abergavenny, we threw ourselves into putting up a tent badly.

This done we were lured by The Lovely Eggs up at the Far Out marquee and were greeted by some very lively punk action. Guitarist Holly was great, playing speedy tunes and throwing shapes. Despite the garish yellow tights she looked and sounded like a star. The crowd loved them. 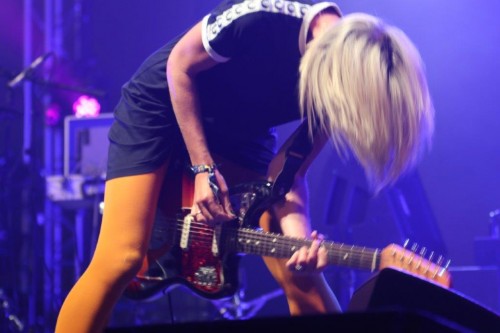 An hour later The Lemon Twigs played Beatlesque slacker pop to an enthusiastic crowd. They certainly won me over but by then whiskey had been taken, so they could have been rubbish, who knows ? Nice vibes, I think.

The best at the Green Man Festival on Friday was a superb set from Joan as Policewoman. A small woman with big talent,  blessed with a multi octave voice that transports you to heaven via Bonnie Tyler’s chip shop in Crickhowell. Her band was super tight, soulful and classy, and what did she do as an encore? Only bloomin’ well Kiss by Prince. Utterly sublime and it’s not even teatime. 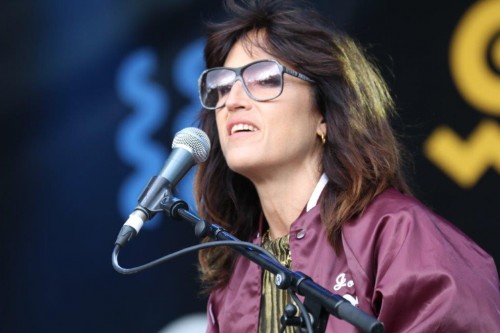 The  Green Man Festival layout is great. It’s not too big although there did seem to be larger numbers of people here this year, which was slightly disconcerting. You don’t expect the Walled Garden to be rammed mid-afternoon listening to obscure Australian folk singers.

In the past there was always room to collapse in a semi-catatonic heap next to a rubbish bin and not get your head trodden on.

Next up was a look at the Green Man Rising emerging talent competition, to sample the delights of fresh new blood. They don’t get any fresher (or madder) than Gentle Stranger. 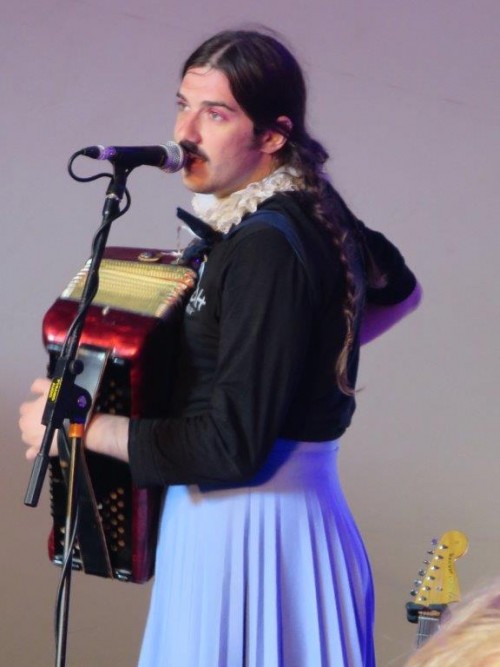 The compere said they were like the bastard sons of Ian Curtis and Talking Heads, which is rubbish. In fact, they were more like the bastard offspring of the Mothers of Invention and a small white sliced loaf.
Among Gentle Stranger’s line up was a drummer who also played oboe and looked like he should be at a Metallica covers band audition. A skinny bassist in awful make up laying on his back holding his bass guitar with his feet whilst applying hair gel. They also featured a topless hairy bloke with braids in a blue midi skirt and hobnail boots playing guitar and blowing on things. Totally fantastic. 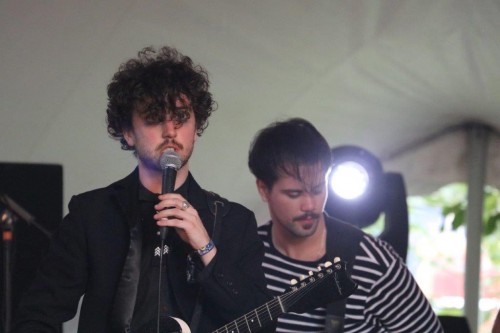 Were also impressed by the dirty, rock ‘n’ roll filth of The Hungry Ghosts from Birmingham. Then had to administer self flagellation for missing Snail Mail, which shows the depth of talent at this year’s Green Man Festival.

Back at the main stage it was time for  headliners King Gizzard and the Lizard Wizard. The Australian psychedelic rockers have inexplicably become hip. Their lengthy guitar work outs, nimble ensemble playing and nicely complimented vocals went down well. But I failed to achieve orgasm, unlike the other five thousand other folk in the crowd. Mind you their 2016 track Rattlesnake was groovy. 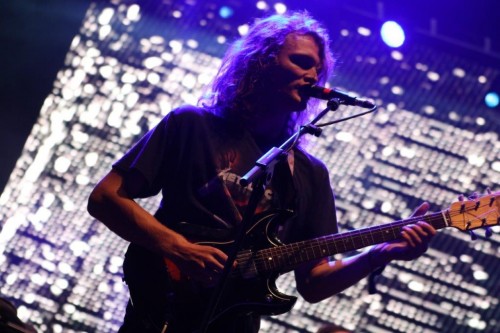 Time to party until the late hours, 11:55pm in our case. We were knackered.

We awoke to no rain, at all, not even drizzle, remarkable.

After a dodgy dinner the Walled Garden played hosts to Goat Girl who seem more popular than The Beatles. The place was full, and quite rightly as they did their no nonsense pop-lite thang.

A duo under the name of Ider did it for me. Poppy niceness to the fore. They should be pop stars tomorrow with their nice bouncy tune and big singy choruses. 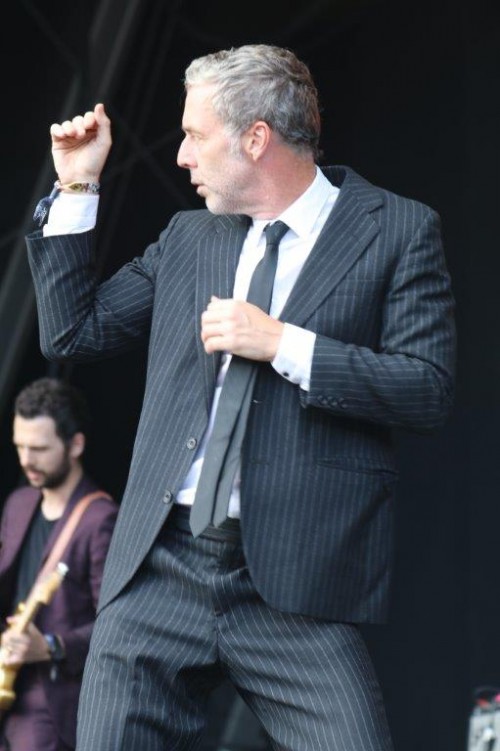 Happiness achieved but  had to curtail my enjoyment to rush over to the main stage to catch the late Ian Dury’s son (thats him on the cover of new boots and panties), Baxter Dury.  Top notch swearing and funky jams predominated the proceedings. He seemed slightly aggrieved but was all the better for it. A riveting set.

The evening then turned into a cosmic trip with a visit down memory lane with the ever dependable Teenage Fanclub.Boy Azooga, despite a hesitant start, won in extra time but then it was time for John Grant.

If you know Grant, you’ll know he was inevitably superb and if you’re unfamiliar with him then where have you been for the last few years?

It’s been heartening to witness  him graduate from touring half full pubs with Midlake five years ago to thrilling eight thousand people in a Welsh field on a nippy night. 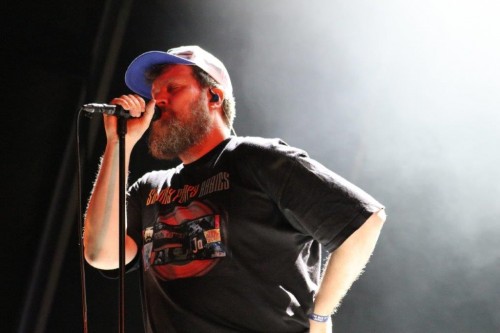 Such is his charm and self-depricating wit that he can make these intimate, lyrically subversive songs work even on a grand scale.

They don’t get grander than Queen of Denmark which tonight is bombast incarnate, yet there is so much more to his music. You have the whimsy Marz. The electro incisiveness of Black Belt and Pale Green Ghosts. The beautiful Glacier and even an almost hit-single singalong GMF.

I asked Grant before he went on to sign a Barry Gibb and Barbara Streisand album. He laughed, signed it and then asked him to do a Bee Gees number. He said he’d think about it but sadly it didn’t happen [what an anecdote that wasn’t].

This Green Man Festival gig was one of the last times you’ll hear this material for a long time, he admitted. It’s new stuff from now on in , and personally I can’t wait to see where he’s going to go next. It is certain to be intriguing.

One of the absolute standouts of the entire weekend was an appearance by Simian Mobile Disco, performing with Green Man Festival regulars Deep Throat Choir.

This was an aural massage the likes of which will live long in the memory of those who witnessed this performance. The two guys within  their jumble of leads, decks, cables , laptops and other magical devices (probably stolen from magic pixies on a night with a full moon), delivered the most deliriously sublime set. Murmerations was performed in its entirety. The choir building up tension as waves of beautiful sound crashed like waves of pure love over our collective heads. I forgot the number of people I spoke to  the next day who thought it was astonishing.

Two hours later and we’ve still not got back to the tent. There were a few distractions. Impromptu Aretha Franklin singalongs, a cocktail bar, a merman and a mermaid, an art installation that was just some lights outside the toilets and a chat with a bloke dressed as a bacofoil deep sea diver thankfully was all I can remember.

Sunday and your despicable soundchecks from War on drugs. I’d only been asleep three hours, still we are veterans after all and by 10 o’clock we were asleep again.

First band on at the Mountain Stage at dinnertime were the new project featuring Simon Raymonde from the Cocteau Twins, called Lost Horizons. 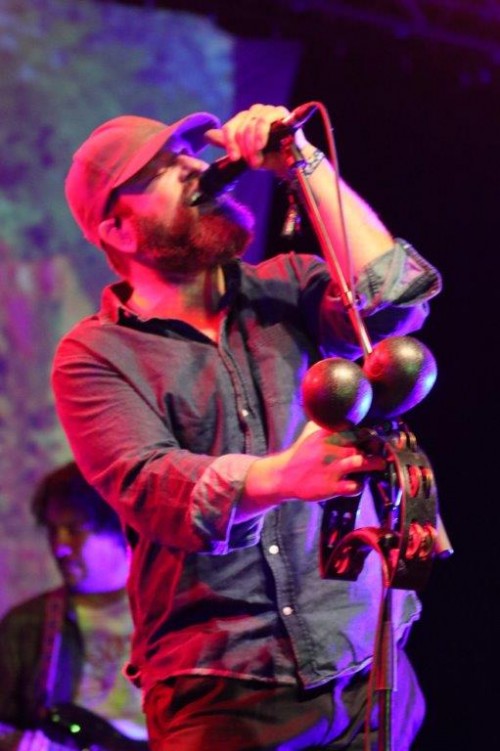 They excel at atmospheric gritty soundscapes with vocal contributions by the bassist, the keyboardist and especially their very expressive lead singer.  A very good way to start the day.

Such is the current vogue for glamping we found an area where you can sit in a hot tub and be served champagne. We were quite rightly immediately ejected.

We tried to enjoy Anna Calvi. But I appeared to be sitting next to the Abergavenny under-fives acrobatic team. It was difficult to concentrate but she was good and the version of Don’t Beat the Girl Out of My Boy was stunning. As was the encore  – a cover of Ghost Rider in the Sky from Suicides’ debut album.

An evening of dark intense brooding rock ‘n’ roll at the Green Man Festival followed. First up Chilean trio Follakzoid who put in an unbelievable performance.

They only did two songs, the first was 25 minutes long, the second 20 minutes and that was only shorter because their enigmatic guitar shaman Domingo Garcia got increasingly angry over the mixing desks inability to hit maximum volume on his monitors. He pulled over the speakers and flounced off in a Chilean huff. After five minutes he came back on due to public demand and finished off the set.

It was great to watch as he played about with his pedals and various fuzz boxes. Then he’s doing the dance of the seven veils and swinging the guitar round his neck as it squeals its protests.

This was in the Far Out tent as were the three remaining acts we saw. 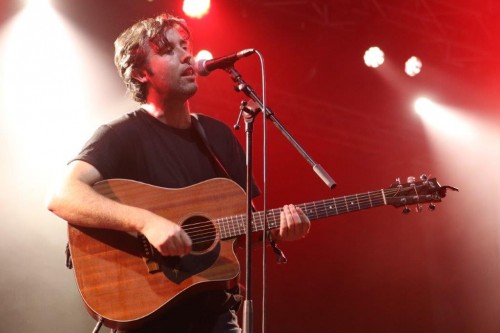 But the  best was to come. The Black Angels were relentless –  a fucked up marathon boogie  kept in the air by non stop drumming from Stephanie Bailey, the likes of which I haven’t witnessed for years. The woman is a machine built of steel and unsmiling stamina. It was like the Velvet Underground but with better tunes.

The icing on the  psychedelic cake of this year’s Green Man Festival was an appearance by the Brian Jonestown Massacre. Imagine the aroma of late 1980s Primal Scream inhaled from a pipe of Exile on Main Street. Loose but tight. Rough but nice. Good cop, bad cop but mostly bad cop. Oh man, this is my rock ‘n’ roll. 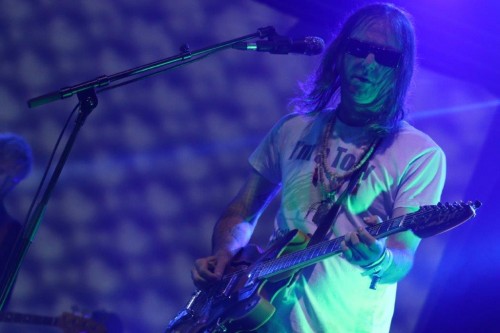 I am unable to describe any further events of that Sunday night as I appear to have run out of superlatives.

Not one bad band or performer at Green Man Festival all weekend. No hassle and no downsides, apart from the small matter of missing the Wedding Present, Tom Wrigglesworth, War on Drugs, Public Service Broadcasting, Kelly Lee Owens, Phil Wang and Teleman.

This festival spoils you every time and you have to make choices.