Spoiler: If you are going to one of the forthcoming TC&I shows please do not read on. Enjoy the surprises. If you’ve been or are not attending, read on.

On Monday October 29 in Swindon musical history was made.

Colin Moulding and Terry Chambers, the rhythm section of XTC, performed together on stage for the first time in 36 years as TC&I.

That will mean nothing to most people.

Colin wrote many of the bands early 1970s/80s hits, such as Making Plans for Nigel. That may garner a grunt of acknowledgement from some.

But to the 200 passionate XTC fans, who made the opening night of a sold out week long set of gigs at the Swindon Arts Centre, their appearance meant everything. Their whole world.

Almost every fan of the Wiltshire band, who finally split in 2000 after 18 years as a critical acclaimed studio band, has prayed to the gods of pop for them to reform and perform again.

With other songwriter Andy Partridge never to perform live again after suffering stage fright in 1982, Terry moving to Australia shortly afterwards, Colin largely shunning the music business for a number of years and guitarist Dave Gregory plying his trade in other acts, that has seemed an impossible dream.

But with Terry returning to the band’s home town recently and Colin dipping his toes more frequently into musical projects they left fans gobsmacked last year when they joined forces as TC&I with a four song EP of Colin songs. And best of all, this summer they announced they would give playing live a go once again. 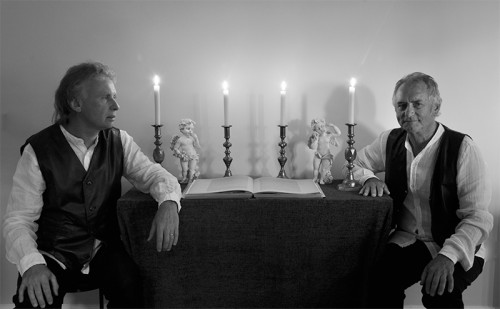 All dates are sold out. They could have played non-stop for the rest of 2018 given the interest, but the Arts Centre panto takes precedence going into December.

Given the very long wait to see their idols, the atmosphere in the packed arts centre was understandably reverential, especially as some had travelled from around the world to attend.

The smiles when Colin and Terry arrived on stage was a moment of beauty.

Colin in the middle aged man’s uniform of cargo trousers and sensible walking shoes, looked more like he was about to nip down to Marks and Spencers to buy some new socks. His scarf and slight mullet the only hint that he has in fact played on Top of the Pops.

Chambers in white t-shirt, looked shy but itching to get behind his drum kit. They were joined by Steve Tilling on guitar, Colin’s son Lee on backing vocals and Gary Bamford on keyboards and guitars for a mammoth 24-song set,  full of the hits, new songs but also some surprises along the way.

Below is the full set list but here we will rattle through some of our particular high points.

What a revelation from 1983’s often overlooked album Mummer, which was sandwiched between two of their most ambitious collections  – English Settlement (1982) and the Todd Rundgren produced epic Skylarking (1986). Here the soft production of Mummer was cast aside and on stage with full band its melody had room to shine. This was the surprise high point for many I spoke to on the night.

Skylarking was well represented, as it should be with Rundgren upping the Moulding song count. Meeting Place, Big Day and Grass were great, but Sacrifical Bonfire was by far the best. Lovely to see Terry take a softer tone with this on a track that was new to him. Mind you, he made up for it by beating the beejesus out of Big Day later on.

Colin’ voice is beautifully preserved, as if kept in honey in his shed for decades, untainted by the rigours of relentless touring. He sounded great all night but Bungalow, which was largely just him and keyboards, was where audible gasps were heard around the enthralled room at the quality of his vocals.

The Drums and Wires album track segment early on of Day In, Day Out, That is the Way and Ten Feet Tall gave Steve and Gary a chance to recreate the classic guitar interplay of Andy and Dave. It was perfectly executed.

Colin also  knows how to write a hit. Making Plans for Nigel, Generals and Majors, Ball and Chain and Life Begins at the Hop were all performed and with his preserved voice it was as if the last 36 years had never happened. We were transported back to their chart bothering prime with only Colin and Terry’s white hair a give away that it was no longer 1982.

Three of TC&I’s own tracks graced the set list but it was Scatter Me that may well stand the test of time and grace the next live shows in another 36 years. Colin embraces his mortality in perfect fashion as his ashes are spread around his favourite haunts.

The talk before the gig was that Colin would be covering one of Andy’s XTC songs. Which would it be? Surprisingly it wasn’t Senses Working Overtime but Statue of Liberty, a pop gem from their debut album White Music with boop-boops galore . They sailed beneath this song’s skirt with gusto.

Andy chose to leave town during these gigs, especially as he lives nearby. It was probably a smart move. This is Terry and Colin’s week, but he is genuinely keen for the shows to be a success, passing on kind words via Twitter to the band. The XTC brand is at risk if they cock it up, so he has a stake in its success. Andy can be rest assured that the XTC brand is in safe hands.

Day in, day out

That is the way

Where Did the Ordinary People Go?

King for a Day

Standing in for Joe

Encore – Statue of Liberty, Life Begins at the Hop.