We love Estonia and we love going back to it’s capital Tallinn for a dip in to the Baltic music scene. This year was our third consecutive visit to Tallinn Music Week and once again we’ve unearthed some muscial gems for your consideration.

Tallinn-based singer-songwriter Anna Pärnoja’s (wife of Neon Filler favourite Erki Pärnoja) unique brand of resonating pop was possibly the biggest surprise highlight of Tallin Music Week 2019, where she mesemerised crowds at the F-Hoone Muust Saal on the Saturday night. Her bewitching vocals coupled with expansive and dark soundscapes are reminiscent of the Florence Welch, PJ Harvey and Anna Calvi. We struggled to get in to the tiny venue but managed to enjoy the entire show side of stage as her spellbinding show captivated the room. We were also treated to an appearance from her husband Erki on guitars which added some wonderful new layers to her live show.

Molchat Doma frontman Yegor Shkutko has a touch of the (Future Islands) Samuel T. Herring’s about him and with his band sounding like a combination of Joy Division and Depeche Mode you can start to imagine their live show. A unique Post-soviet punk band from Belarus their music reeks of 80s punk with a darker edge that borders on industrial. Their minimalist drum machines and unsettling electronica gave the crowd in Kivi Paber Kaarid restaurant an unforgettable taste of a punk era that seems almost long forgotten. 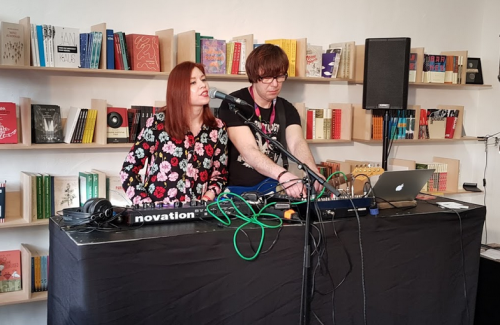 Ever get that feeling when you first hear a piece of music and somehow it feels like you’ve been enjoying it all your life? You think it must be a cover of some old favourite and then you realise it’s brand new but somehow comfortingly familiar. Well Alex Kelman had us at ‘Rain’. Perhaps it’s the swirling, jangling ‘New Order-eque’ guitars or the beautiful female vocal lines that do it. Little known Siberian Alex Kelman performed twice at Tallinn Music Week 2019 and we were lucky enough to catch his warm up show at the Puant Bookshop where he performed Rain, alongside some of his new material comprising a wonderful blend of synths, guitar and captivating guest vocals.

Duo Ruut are one of Estonia’s hottest prospects of 2019, after winning the 2018 Noorteband (Youth Band) competition last November. This win propelled the folk duo to a sea of festival bookings for 2019, the first being at this year’s Tallinn Music Week (TMW).

We first saw them playing in a telephone shop (yes this is the kind of venue you get at Tallin Music Week). The thing that first struck us was the beautifully symbiotic relationship between the female duo, as one carried the instrument they play (the Kannel – you might have to google this one) in to the venue and the other tuned it.

When it came to the time to perform they sat facing one another (like inuit throat singers). The large instrument across both their laps. They proceeded to both play the instrument at once, by a variety of plucking, using a drumstick, bow, and patting (Ben Howard styley). Instrumentally on its own this would be beautiful and innovative folk, but when the mesmerising vocals were added it left us enchanted.

The last song in their Tallinn Music Week set was “Tuule sõnad”, which means words of the wind perfectly encapsulated, not only them, but Estonia as a nation. A love of the past, traditions, culture, but also the innovativeness of the country, it’s people and hope for the future.

The venue (Leila Bar) looked as if it hadn’t changed since the 1990’s, and the clientele upon our arrival, the same. As the hipsters, who normally proceeded to follow the festivals every step, were suddenly met by grandma’s enjoying a relaxing afternoon cup of tea.

When the two middle aged gentlemen (who make up Puulup) hit the stage you could be forgiven for thinking the clientele would match the music that was about to come, but you couldn’t be more wrong.

The duo, once dressed like a hasidic jew on his way home from the synagogue and the other not too dissimilar to Keith Harris, defined their style as Zombie folk. And, you can’t disagree when their songs included a love song about a wind turbine.

When you imagine that this was topped of with accompanying dance moves, you can understand why they were the first band of the weekend we saw (and on day three) that a crowd actively demanded an encore from.

Imagine the Corrs, but there are half a dozen of them, and there is no Jim in sight. And you will already have a good idea of the group. Not only visually were they as mesmerising as the Corrs in their traditional Latvian costumes, but musically too. Each playing one or more instruments (don’t worry, these included the violin).

The six women could well be likened to sirens that have attracted many sailors to their deaths over the centuries. And when singing the song Tautumeitas (yes the same as their name), which means a woman of marriageable age, it would have been very easy to have been drawn into their spell. And, we certainly were 😉

Words and pictures by Marc Argent.