If you like Gomez or Tom Odell, then I can recommend them. I’ve seen both and they are great live and I’m sure their  appearances at this year’s Larmer Tree Festival added to their reputations as performers that walk the walk (sing the sing?) when it comes to belting out bangers.

However, this is Neonfiller, so we will focus on acts that you may have the chance to see at The Joiners Arms, The Exchange, Thekla, The Hare & Hounds, or other venue local to you.

Where better to start than a half-empty tent at 9:30pm on the Sunday night, populated with small groups of Odell refuseniks who are now just about running on fumes after the long festival weekend? 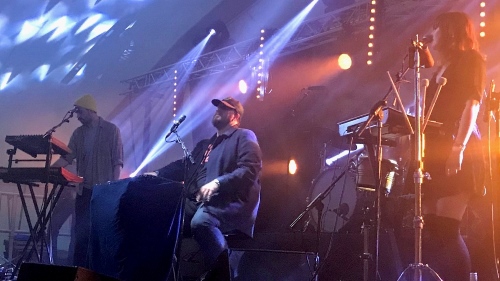 Into this cauldron of apathy strolls BC Camplight who promptly delivers the performance of the festival. Brian Christinzio is a piano virtuoso with a big voice and – seeming to serve notice to the sparse crowd that they were in for a ride – started big, with Deportation Blues. With barely time to swig more gin and wine that can be good for you (and nurse a melting microphone stand) he and his band piled into the set list. Just Because I Love You and I’m in a Weird Place Now showed the full range of his voice, from choirboy sweetness to Springsteen bellow.  Fire In England started as expected but morphed into a deranged Madness / John Grant mash-up whilst You Should’ve Gone To School washes over like a soothing AOR balm.

The band is on the ball and tonight this sonically confusing, sometimes scary, but ultimately warm and big-hearted performance gave the crowd more than they expected.  Inevitably I’m Desperate closes the set and (with an exhortation to come back for a main stage appearance at The End of the Road Festival here later in the year) he is off.

It’s easy to forget how good BC Camplight is. A frenzied all-night trip with Michael McDonald and Billy Joel that turns out OK by the morning might get close, but if that’s not an option, then go see him. 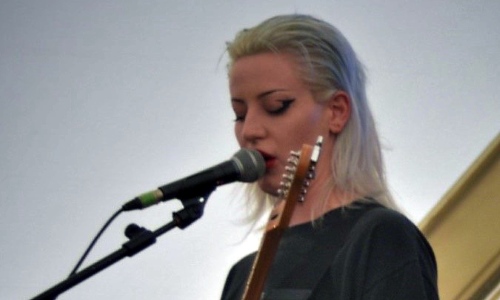 Working back to Saturday afternoon, Du Blonde (Beth Jeans Houghton) clearly has more artistic talent and drive than I could dream of. As well as writing and performing, she is a painter and illustrator, and has produced animations for her own work and the likes of Ezra Furman and Lump. Given this, the fact that she gave a vocal performance that had hints of Anna Calvi shouldn’t have been a surprise. The driving rhythm section set the scene for her guitar playing that – through a diverse set list that veered from rocking out riffs to doleful ballads – left you wanting to hear the next song. Angel stands out for its riff heavy chorus, and whilst some compositions lacked streaming-friendly immediacy, your patience is rewarded.

Odstocks, appearing in The Village Inn, a two minute stroll from the Peacock Palace (where Du Blonde wrangled her Stratocaster) gave us a nonstop set of proper stonking Indie boy rock, but with enough twists and turns (including occasional hints of The Cure in some of guitarist Tommy Nicklen’s repertoire) to lift them above pub rock. Determined to ignore technical glitches – from both the sound system and lead singer Jack Wilkinson-Holton’s sunglasses – their vibrant under-3-minute tunes won the tent over. 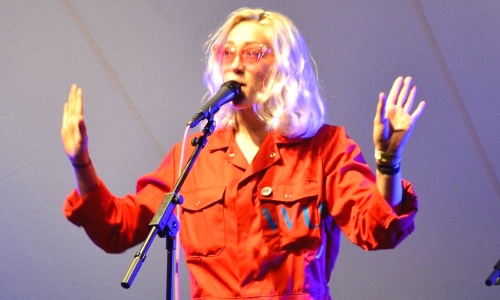 The act most thrilled to be at the Festival was clearly BASH! Following up on their main stage appearance the day before, the smaller Village Inn tent was full of people and anticipation well before they started. With pop unashamedly front and centre, they had the attitude of a born-again Postcard Records signing. Lead singer, Amanda Bashmakova started off a little breathless but her Claire Grogan-like delivery quickly matured to a vocal performance evoking Gwen Stefani. Not to be out done by Amanda’s vogue-ing; bassist Miles Hobbs injected both funk and – via expert stares and moustache twitches that Ron Mael would applaud – added a little jeopardy to keep the crowd on their toes. “Lovely, Smart and Beautiful” showed them at the best, and as joint winners of Larmer Tree’s ‘Breakthrough Act’ (alongside with Bristol’s Agata) the organisers must have been chuffed at the reaction of the crowd. Fun, not dumb.

Surprise act was possibly (& perhaps controversially) K T Tunstall, who cranked up the rock with her new band. Yes, she still gets the Acoustic out to play arms-in-the-air ballads and crowd pleasers, like the loop-pedal ‘woo-hoos’ of Black Horse and the Cherry Tree, and the Radio 2-friendly Other side of the World, but tracks like 2010s Push that knot away get a heft that had not been evident before. This band featuring Mandy Clarke on bass and Cat Myers (whose work with Honeyblood has been praised on Neonfiller before) give KT an urgency and attitude that takes the music somewhere else. Think Blondie, think The Pretenders, think nice one KT.

For reasons beyond my control I could only arrive on Saturday, so was sad to miss some bands, but it is clear Larmer Tree is a great little festival with big acts. Yes it’s one for the families, but there are some acts in there that can still be relied on to frighten the horses and the compact size of the site, easy camping, and lack of crushes is a joy to experience only a few weeks after Glastonbury.

My only wish (other than a magic credit card for all the good booze and food on offer) would for tents that don’t have posts right in front of the centre of the stage, and zero tolerance for steel prince/princess trollies that blight this beautiful place – children love festivals, strap them to you, let them run, or hold their hands and walk. People will love you for it.

Words and pictures by Matt Turner

Editors note: Friends of the site, The Jangle Brothers (who may include this editor), DJ’d a woodland silent disco set at the Larmer Tree festival on the Saturday night. They are available for weddings, discos, parties, festivals etc. etc.