Its been a while since Glastonbury’s Duncan Batey last got in touch with us, having first impressed us with his acoustic folk Blindsided EP back in 2013.

We caught up with him again four years later at the Glastonbury Calling festival and were warmed once again by his thoughtful, melancholy songs, backed by cello and double bass. 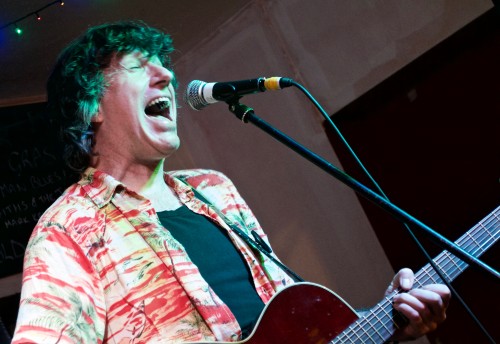 With a new decade underway he’s back again with his debut album, to offer a wider audience a sample of his work.

Once again he’s backed by a welcome string section, this time with a violin added to the mix, aling with accordion, slide guitar and more.

The effect is modern and traditional, mixing a 1960s feel with melancholic modern folk and chamber pop.

This 10-song collection opens passionately with Cleanskin, with strong, often high vocals blending well with the string section beneath.

Little Black Classics, the one with the accordion, has a European feel to it and blends melancholy with pop sensibility well. Imagine Ray Davies on holiday in France.

Stoney Ground is another song to stand out, with harmonica helping further to marry the traditional with the modern. While not a direct ode to Arthur Lee’s timeless band Love, it made me want to immediately go and play their 1967 classic Forever Changes.

My favourite may be Home By Now, a simple acoustic number where vocal and string section combine perhaps the best. It also features the most catchy of this album’s choruses.

Meanwhile, Run is surely influenced by those miraculous final Talk Talk albums such as Laughing Stock.

There’s a range of styles here but with a distince blend of old, new it works well. Like an old friend it has a feel that immiedately hooks me in, as the sounds of Love, Talk Talk and the Kinks swirl around amidst Batey’s vocals and those marvellous strings.