For the first time in almost two decades Mountain Goats songwriter and frontman John Darnielle has returned to the Panasonic RX-FT500 boombox that served him so well through his early career. 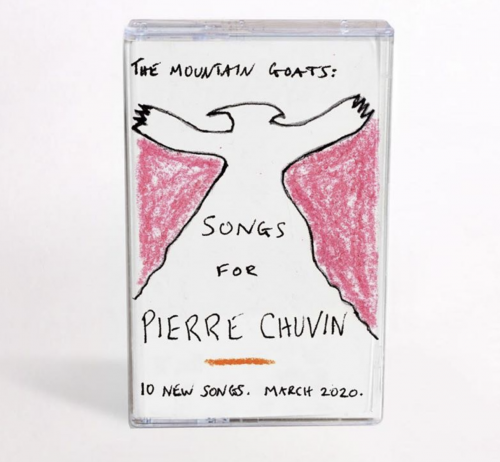 Not since 2002’s All Hail West Texas has this trusted electronic collaborator been dusted off for a Mountain Goats release. Why should it with a stellar band assembled for recent releases and tours, including bassist Peter Hughes, Superchunk drummer John Wurster and multi-instrumentalist Matt Douglas?

But the sonic scope of last year’s In League With Dragons or another beautifully produced album, 2011’s All Eternals Deck, is simply impossible as Covid-19 locks us down.

Darnielle has instead gone back to his lo-fi roots, pressed play, stood the boombox on one end to avoid a faulty click, worked on a song a day and produced a great album for our isolated days.

Songs for Pierre Chuvin is based on the French historian Chuvin’s book A Chronicle of the Last Pagans. This is Darnielle’s inspiration across a collection that feels that each is written as if a sweeping string section or melancholy set of horns should be heard.

But stripped back it does admirably, showcasing what Darnielle has always done – writes good lyrics with good melody. That’s it. Simple. That’s all you need for a good song.

And on Exegetic Chains we have one of the first great lockdown songs. Is that now even a genre? Take these  lyrics for example:

Make it through this year

…if it kills you outright.

Other highpoints include second track Until Olympius Returns, where he venomously vents at hierarchies, whether pagan temple dwellers or perhaps referring to the politicians mishandling the current crisis. It also features a great “yeah”, which I always like to hear.

There are further parallels across this collection to the pagens’ constant threat to life and the Covd-19 fearing set of online communities we have become. Here we are adjusting to loneliness and blotting out the full impact of those dying alone in hospital.

Songs for Pierre Chuvin is released digitally but also as a cassette in the US. This physical form of the album sold out swiftly with a third edition of a further 2000 copies underway. If any are left over they will be sold at future gigs.

The digital release too is proving popular, especially here in the UK. After its first day it had reached number seven in the album charts, solely on digital sales.

While this is very much a solo album, his bandmates and the whole team of people that rely on income from the Mountain Goats are firmly on his mind. Proceeds of this release will go to them.