The following is a quote from the illustrious arch dude Julian Cope. “With no peers, save from Popol Vuh, whose own mystical re-evaluation of music also began with electronic experimentation, courtesy of the revolutionary Moog, Tangerine Dream became the most influential electronic musicians due to their breakthrough album Phaedra.”

From the late sixties to the early seventies Tangerine Dream’s work constantly pushed the envelope. Work that was both experimental and in constant flux, instrumental in nature and often mind meltingly psychedelic.

One man was a constant leader of sorts, Edgar Froese, it was his visions that propelled the band, together they coaxed and wrenched new sounds from the new Moog technology. 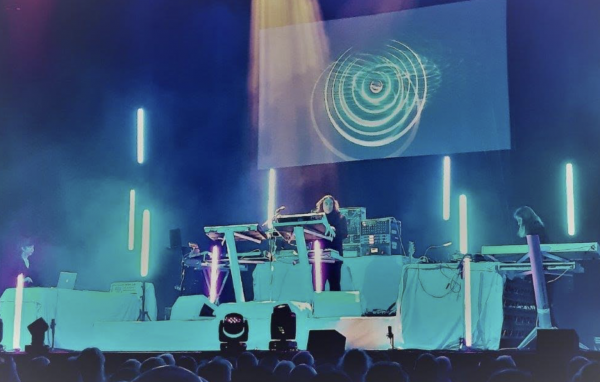 Then in 1974 Richard Branson and his newly formed Virgin label signed them up and something rather miraculous happened. They transitioned from obscure underground purveyors of trippy music to an almost mainstream acceptance of their evolved sound. This was due to the album Phaedra. It’s an astonishingly beautiful and totally original soundscape. Glacial and majestic, exciting and pulsating. It invented Ambient. It fertilised the egg that was to become techno. Ground-breaking is an understatement.

Consequent albums built on this.  But by the nineties the sound became a little too streamlined. The dynamics that made Phaedra so special dissipated somewhat. Then in 2015 Edgar passed away and that was it. Or so we thought.

Recently his widow has given her blessings to a new line up, one that comprises Thorsten Quaeschning, Hoshiko Yamaha and Paul Frick. Their new album Raum is a thing of beauty and it is a performance of this tonight that brings us to Birmingham on a suitably glacial evening.

Birmingham Town Hall is an austere Victorian monolith more suited to orchestras than a barrage of experimental electronica. But it does have remarkable acoustics.

Opening with a barely recognisable Stratosfear, Tangerine Dream pummel the crowd with swathes of pulsating sequencers. In amongst the sonic maelstrom could be discerned the theme from Sorcerer, Dolphin dance and Tangram and a stupendous version of Horizon parts one and two

We got a lovely version of Logos, with its haunting melody then they dive into tracks from the new album, Continuum and the curiously titled, It’s time to leave when everyone is dancing.

There’s a short break to allow everyone to re assemble their brains and they return to the new album for a version of the title track and You’re always on Time. The last number was a ‘re creation of the title track from Phaedra. It was an onslaught, a magnificently huge speeding spectacular, the light show accordingly went into overdrive. Total brain melt!

For the encore they perform a long improvisational piece, this has become something of a ritual on recent dates, it was fabbo.

I’m quite sure wherever Edgar is he’d be smiling at this ‘re invention of his musical vision, he’d be skinning up with God and grinning from ear to ear, I know I was.