In which Debbie does Nottingham, on a wonderful double bill with ex Smith’s guitarist Johnny Marr. A battle of epic proportions is on the cards.

The Blondie set is an unashamedly nostalgic trip down post punk lane, ninety minutes of insanely melodic hits that the crowd lap up hungrily.

Despite her years Debbie soldiers on bravely and together with original powerhouse drummer Clem Burke, the surprise addition of former Sex Pistol Glen Matlock on bass, a keyboard player and two guitarists. They storm the barricades and turn the venue into a veritable school disco, Call Me, Dreaming, The Tide is High, Union City Blue. You know the list.

Sadly,  legendary Blondie guitarist Chris Stein is not present this time around. He’s back in the US with health issues but they more than compensated for his absence. Atomic, Sunday Girl, Rapture, Always Touched By Your Presence Dear. The list goes on. Old punk rockers don’t die. They slowly morph into a kindly pensioner in glittery gold slippers.

Meanwhile, Marr was incredibly good, dropping in various Smiths tunes to the collective delight of a sold out crowd. How Soon is Now and This Charming Man sounded especially vibrant . With choice cuts from his new album Fever dreams wherein he continues to forge new pop paths sounded superb. 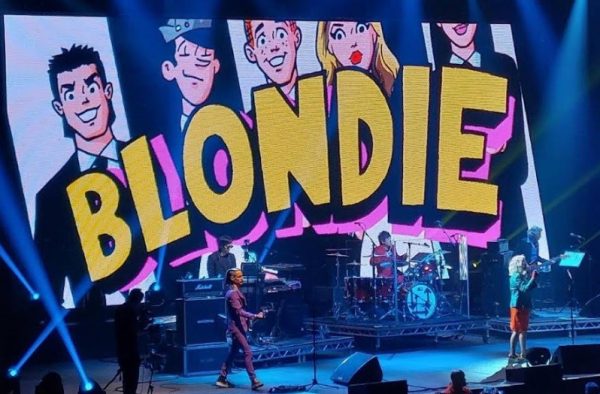 “This is a disco song…from Manchester,” he said, as he wrestled Getting Away With It into the ground. He followed this with the ridiculously catchy Easy Money and to finish with he did the deliriously poignant There is a Light. It was genuinely moving. I found myself gagging for THAT reunion. Yes I was Dreaming again.