Research shows that those of us lucky enough to feel shivers when listening to music have an enhanced ability to experience intense emotions. It’s a visceral reaction, albeit one based on an actual biological difference: those that feel those goosebumps have a higher volume of fibres that connect their auditory cortex to the areas associated with emotional processing.

I’m reminded of this in the opening minutes of Love In Bright Landscapes, a documentary telling the story of David McComb, the singer and songwriter of The Triffids.

For those unfamiliar with the band (and there are many), they formed in Perth, Western Australia in the late ‘70s and achieved some success there, but were much more critically successful in the UK and Scandinavia in the late ‘80s before splitting in 1989. Contemporaries included Nick Cave and The Go-Betweens, but The Triffids were the nearly-men (and woman) in a rich Antipodean market. 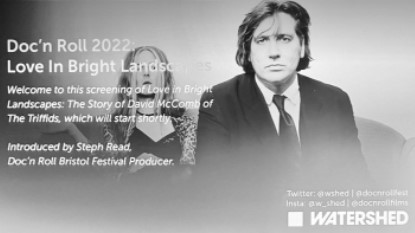 McComb was a writer of rare talent. He could compose songs that evoked deserts both physical and metaphysical, and live, was a frontman with an undeniable magnetism. Born with a congenital heart defect, he nevertheless fell into self-medication-in particular with alcohol. There is some conjecture over what caused McComb’s death in 1999 aged 36, but this film is more about the legacy he left rather than dwelling on tawdry details.

Directed by Jonathan Alley (and ten years in the making) it’s very much a labour of love. In the days before the ubiquitous mobile phone footage, the live shots show a band that at their best could compete with the Bad Seeds for a religious experience.

All the footage is punctuated by Triffids songs, and reminds us what a loss McComb was and is to the pantheon of great songwriters. Nick Cave said this of McComb: ‘I realised that his abilities extended far beyond the norm. He actually did have the capacity to telepath messages through the vast unknown, if songs can be telepathy.’

You might not know The Triffids, and then there are some that might think of them only in the context of their two most well-known songs-Wide Open Road and Bury Me Deep In Love.

They, and McComb, deserve to be much better known, and this documentary goes a long way towards affording them that recognition. It’s a film that has a heart, one that ends a little broken, but that is full of love.