Madonna had it bang on in July 1985 when she extolled the virtues of getting into the groove,  that indefinable pulsating piston of pop that when achieved successfully deep fries your mind. Many have attempted this feat yet only a select few can pull it off. When Stereolab get into it, few can equal it.

They make it exhilarating and by the end of their set, at Leeds University venue Stylus, I was hearing echoes of The Velvet Underground and Neu being beaten into sonic submission. It was quite wonderful.

With such a large back catalogue to draw upon they traverse it with aplomb. In covering a three decade career they went from French lounge to New York angular post punk (often within the same song). 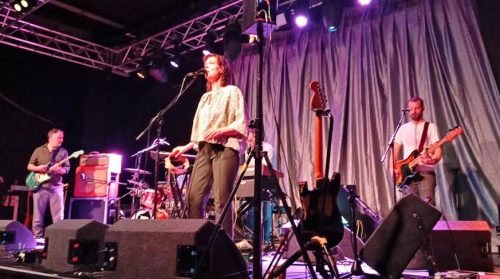 Sadly only two original members are in the current line-up, Laetitia Sadier and Tim Gane. Tim especially becomes a focal point with his guitar playing. He gets right into it. I love his almost dismissive and repulsive attitude to his frenetic riffing. It sounds and looks terrific, gold stars too for drummer Andy Ramsay who was faultless.

Was great to see so many young kids there, perhaps they thought they were going to a students drum ‘n’ bass evening.  Whatever the reason it was heartening to see such an appreciative audience.

On the merchandise stall along with all the vinyl albums were Stereolab beer trays, only £20 each, Madonna missed that trick.

For more about Stereolab check out their website.
Words and pictures by John Haylock