The Primitives are back with their first new recording since 1992.

The  indie pop veterans’ EP Never Kill A Secret features two original tracks, ‘Rattle My Cage’ and ‘Never Kill A Secret’, as well as two covers, Suzi Jane Hokom’s ‘Need all the help I can get’ and Toni Basil’s ‘Breakaway.’

We’ve been sent an early copy ahead of its 7 March release and have been left pleasantly surprised.

The tracks have got that familiar bubble-gum, indie-pop feel as their 1980s and early 1990s singles like ‘Crash’, with the infectious ‘Rattle My Cage’ a real highlight. The title track has less impact, but with more than a few nods to the 60s and the same keen sense of melody as their early hits  it shows a band that is clearly pleased to be back  and happy to stick to what they are best at, rather than go in some new misguided direction. 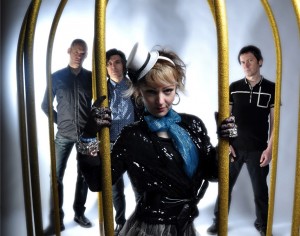 It’s a good thing they haven’t changed much over the years as with a string of UK dates coming up during March and April they are facing the tough ask of pleasing the old guard of aged indie kids again, as well as those young enough to be their sons and daughters. For us aged indie kids at Neon Filler the new tracks should slot seemlessly into their set.

Being signed to Fortuna Pop  is a good fit for the band as they seek to appeal to young and old alike, especially as the indie label is home to other elderstatesfolk of indie music such as Darren Hayman, as well as new indie kids on the block like Allo Darlin’, Fanfarlo and Pains of Being Pure At Heart.