ATP is among the most remarkable of festivals. Since it started around a decade a go its crucial difference is that a specific band often  gets to choose the line up.

This tends to give it a greater sense of ownership for the band that curates and  for their fans, who get a greater insight into their tastes and influences. The holiday resort settings, of comfy chalets rather than tents and muddy fields, also help.

This time around it’s the turn of Pavement to curate an ATP event, at Butlins in the British seaside resort of  Minehead. Reunited for a nostalgia tour after going their separate ways in 1999, the band that was influenced by and have influenced so many has come up with a  line-up dominated by US guitar rock and punk legends, with the odd curveball thrown in.

Opening the festival in the late afternoon was Avi Buffalo, signed to Sub Pop, barely out of their teens and over here from their native California to promote their recently released debut self titled album. They’ve pulled the short straw getting to open the event as many are still arriving. They didn’t care, just pleased to be there. A short engaging set on the smaller Centre Stage was full of tracks from their debut album and ended on a high with ‘Remember Last Time’. The guitar solo on that track is as much a thing of beauty live as it is on the record. 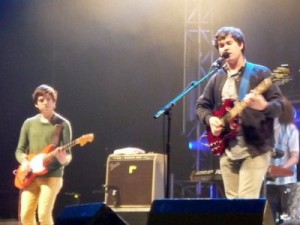 Main stage opener Surfer Blood (pictured above) is another up and coming new band, this time from Florida. Triumph of the geeks was how my friend described this motley bunch of fat, thin, weedy, bad jumper wearing young things that packed a real punch. Lead singer bellowing out tracks such as ‘Take It Easy’ from their debut Astro Coast as well as a new song, ‘I’m Not Ready’, which was full of their familiar catchy riffs. “Ever witnessed the pinnacle of a career,” says bassist Brian Black to lead singer John Paul Pitt in a self deprecating way. They know they are privileged to be here. What new band wouldn’t want Pavement’s seal of approval?

Calexico (pictured below) decided to play a set that they see is best suited to the rock festival audience, with a focus on many of the more conventional guitar lead songs from their catalogue. This was a mistake as it is the more atmospheric acoustic tunes that would have set them apart from the other ATP acts. 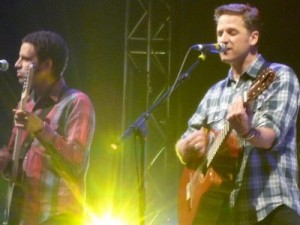 Nevertheless they are a very slick band, most of the group being in demand session musicians, and they produce a note perfect sound. Highlights include the mariachi blast of ‘Crystal Frontier’ and their covers of Love’s ‘Alone Again Or’ and The Minutemen’s ‘Corona’.

In sharp contrast at the same time on the Centre Stage was The Walkmen. Lead singer Hamilton Leithhauser has a voice to rival ACDC’s Brian Johnson and tonight they put in a killer performance. A minor bass amp explosion put them off their stride three songs in but only slightly. Showcased tonight were some new tracks off the new album, due out this summer, which sound in a similar vein as their excellent 2008 album You and I. ‘New Year’ from that album is now as big a crowd pleaser as ‘The Rat’, and both were among the highlights of a powerful, passionate set.

Friday’s main stage headliners Broken Social Scene are veterans of ATP Minehead now, having headlined the Explosions in the Sky curated event two years ago. They are now a different beast.  Leaner and showcasing tracks from their latest album Forgiveness Rock Record. Tracks from the hook laden first half of the album such as ‘Art House Director’, ‘Texico Bitches’ and ‘World  Sick’, went down particularly well. Although Forgiveness Rock Record dominated the gig, the biggest cheers still went out for classics such as ‘Fire Eyed Boy’ and ‘7/4 (Shoreline)’.

Couple of gripes, one being BSS’s Lisa Lobsinger. She follows in the footsteps of previous BSS female vocalists such as Leslie Feist but her voice is far weaker. Drifting on and off stage like Helena Bonham Carter,  she sauntered, whispered and vanished. Not even the glimmer of a smile, in sharp contrast to the energetic displays of BSS mainstay Brandon Canning. The other gripe was frontman Kevin Drew, who had the touch of the Bono about him tonight. “We’re all forced to love,” he glibly declared before ‘Forced To Love’. Er, no were not. Just play the song man and stop talking rubbish.
Special final mention must go to Mission of Burma and Quasi. Although formed originally in 1979 and looking their age MoB played with the energy and excitement of the new bands that started the day. Quasi rounded off the day for us at Neon Filler. They are musos with edge, the rock three piece to beat all three pieces and in drummer Janet Weiss, formerly of Sleater-Kinney, they have one of the stars of the festival.

The day of Pavement’s headline performance starts in jovial fashion. Kentucky band Wax Fang, the lovers of the guitar, performed Purple Rain in its entirety  and perfectly with more than a little Prince tongue in cheek on the smaller Red stage.

Meanwhile over at the Centre Stage The Drones were justifying their reputation as one of the best live acts around. Lead singer Gareth Liddiard, who is vocally like an Australian Joe Strummer with a bomb attached to him, powered his way through the set that got better as it went on. Kept going by the rock steady bass and drums, the band allow his guitar work and vocals to shine. Sometimes it goes too far, too over indulgent, but on tracks such as ‘Shark Fin Blues’ all aspects came together perfectly.

Almost in anticipation for Pavement, whose frontman Stephen Malkmus is no stranger to guitar solos, it was a day dominated by the guitar, with Blitzen Trapper following on where The Drones and Wax Fang left off. Blitzen Trapper, from Portland, Oregon, is a strange act. Jack of all genres but masters of none and their  prog rock guitar work sadly became tedious after a while.

In the midst of  the predominantly guitar based acts of the day Mark Eitzel (pictured below) was something of an oasis of calm. Backed by drums and electric piano he presented an act that was more music hall than music festival and it was wonderful.

The set mixed his solo songs with a healthy dose of American Music Club favourites, including ‘Nightwatchman’, ‘Johnny Mathis’ Feet’ and ‘Patriot’s Heart’. The songs are challenging in content and Eitzel voice is a very powerful instrument, easily the strongest vocalist of the weekend, and the songs have a real emotional impact. 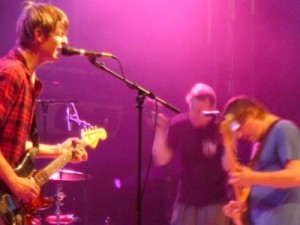 Pavement (pictured above) proved to be the the perfect festival band. The excitement of seeing a reformed legend was matched by the quality of their set. No confrontational artists here, no set made up of new songs ands obscure b-sides. This was a crowd pleasing “hits” set played well with ‘Cut Your Hair’, ‘Stereo’, ‘Summer Babe’ and Spiral Stair’s ‘Two States’ going down particularly well with the crowd.

From the opener ‘Box Elder’ to the final encore track ‘Debris Slide’ the quality of the songs never dipped. It is easy to forget that, for all their slacker reputation, what an accomplished band Pavement were. There is a real variety to their sound, pop hooks, scuzzy no-wave noise, and balls out power chords all make an appearance. And in the soft and thoughtful ‘Here’ they have a candidate song for the great American songbook.

Malkmus is the star of the show, looking no older than he did back in the early 90s. His casual approach to playing the guitar, all loose hands and slinging it over his shoulder, belies his skills. The joker in the pack Bob Nastanovich is also excellent value jumping around, screaming and shouting his way through his vocal parts.

Throughout the weekend you got the sense they enjoyed their role of curators, popping up in the audience at the acts they’d chosen and holding court outside their VIP chalet. Drummer Steve West even treated people to a stone masonary display during the day, his other career outside drumming.

The end to the evening was another rare escape from guitar rock and proved to be the most eclectic segment of the weekend. Over at the Reds stage was the Syrian dance of Omar Souleyman, who worked the crowd into a frenzy while remaining calm and assured himself. Teenage geek tales from an acoustic set by Atlas Sound followed and then it was the turn of the best party band around San

Tim Chad and Sherry are made up of former Lambchop and Silver Jews members and put in a fun, laid back set blending funk, country and soul at the Centre Stage in the afternoon. But it was up to Wax Fang to continue the weekend’s love affair with the guitar. Top draw musicians, but by day three what the crowed perhaps didn’t want was another guitar solo orientated band, no matter how engaging.

Some of the most exciting bands across the weekend where among the oldest, just like Mission of Burma others such as The Raincoats and The 3Ds were also  class acts.

Terry Reid was also a fine advert for the older generation. Looking and sounding like a London cabbie who’d won the pools in his perma tan and Californian English accent. He’s a soulful, powerful singer, full of passion and showing he is an experienced performer but nowhere near a jaded one. 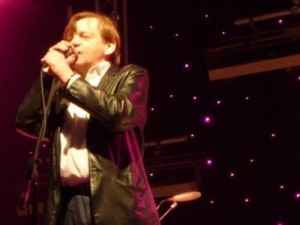 Then there was veteran Mark E Smith to round off proceedings on the main stage. With his band The Fall (pictured above) as headliners you never know what you will get. Luckily this was among the best Fall performances I’ve seen. Buoyed by what Smith describes as the best band “he’s ever had” and a great new album Your Future Your Clutter, which dominated the set, he was in jovial mood. Opener ‘Our Future Your Clutter Showcase’ was an early indication of just how good this band are. Each came on in turn sounding out the clear, crisp familiar Fall groove, then the man himself shuffled on. Looking 20 years older than his 50 or so years in crisp white shirt, leather jacket and suit trousers.

Smith belted out and mumbled track after track, all from the most recent few albums. Drifting across the stage, trying to put off his latest drones with his queen bee amp twiddling, retuning of instruments and  random mic switching. Creativity through fear and confusion has been his mantra for years. The band looked hardened to it though.

A highlight was the encore. “That’s it” Smith said after a short two song encore including ‘Reformation’. But as the lights went up and people departed he came back on. The look of joy on his face as the tired indie crowd is forced to run back humiliated to hear recent classic Sparta FC for a second encore was a thing of beauty, just like the guitar solo of Avi Buffalo at the start of the weekend. 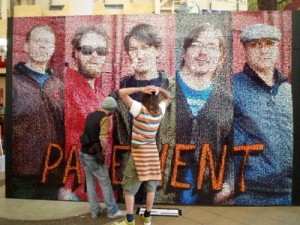 We have more pics from the festival at our Facebook page.