Both the gathered mass of 30 and 40-somethings and The Wedding Present themselves seemed equally surprised that this legendary indie band found itself playing Yeovil, Somerset, this month (June) for the first time in nearly three decades of gigging.

The Wedding Present, these days with just songwriter and frontman David Gedge remaining from their original line up, may have a back catalogue of 250 songs but they are far from being simply a greatest hits act. Gedge quite rightly considers the act still to be a creative force in indie music and while the set spanned most of their 26 years it contained a fair sprinkling of new ones and omitted a good chunk of their most well known tracks.

Tracks from 1989’s Bizarro, such as ‘Brassneck’ and ‘Kennedy’ were notable absentees, but seeing as they’ve recently finished a 21st anniversary tour of the album this is perhaps unsurprising. Only ‘Gone’ from Bizarro made a set list that had a bias towards their early 1990s period, including Seamonsters (1991) and their run of chart hits from 1992, the year they released a single a month. 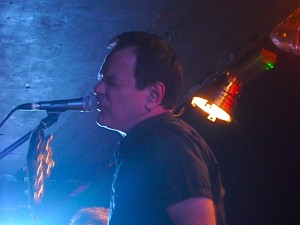 Also strangely absent were tracks from the albums El Rey (2008) and Take Fountain (2005). Not sure whether there has been a Stalinist purge on this period. I hope not as Take Fountain features some of Gedge’s finest songwriting.

Among the highlights were those from the earliest and most recent points in their career. Opener ‘My Favourite Dress ‘, from debut album George Best (1987) and early single ‘Why are you being so reasonable now?’ proved crowd pleasing moments. A surprise highlight was second track and  new song ‘524 Fidelio’. This was among  the most pop savvy of the night and featured some fine backing vocals.

A small segment of tracks including ‘Health and Efficiency’ by Cinerama, the band Gedge formed in 1998 and morphed into The Wedding Present in 2003, also went down well despite being unfamiliar to some of the crowd. 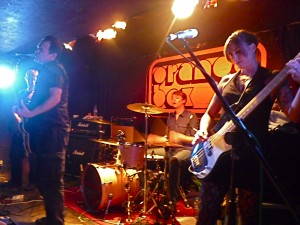 While there were cries from the audience for their own favourites the band, which clearly has a strong work ethic in the same mould as other music survivors The Fall, rigidly stuck to the 20 song list and it’s career long no encore policy. “Its nothing personal, we just don’t do encores.,” Gedge politely announced.

Apart from a slightly hairy mic grabbing moment from an enthusiastic 40 something (who is surely going to be red faced back in the office on Monday) this was a typically engaging performance from Gedge and his well drilled band. Gedge particularly seemed to enjoy the responses from the crowd to his question “so what is Yeovil famous for”. It was a pleasure watching his reaction move from laughter to confusion to admiration as the  responses of “fuck all” , ” gloves” and “PJ Harvey” followed.

* Support was provided by  Nick Parker and Design. Somerset based singer songwriter  Parker has recently returned from a multi-date tour of Germany and delivered a tight, polished set of his thoughtful songs about modern life. Design, which contains members of 1980s Somerset bands The Chesterfields and Thatcher on Acid, provided another retro indie highpoint of the night with their take on The Chesterfields’  late 1980s track ‘Ask Johnny Dee’.

More photos from the night, as well as regular features such as ‘classic clip of the day’ can be seen at our Facebook page.