This year’s Indietracks, now in its fifth year, was frankly one of the great festivals on the calendar. It had moments of magic that you couldn’t architect through pyrotechnics, a well choreographed routine or bringing on a gospel choir – you simply had to be there.

Witness Edwyn Collins, Saturday night’s headline act. The generator fails on the main stage. The Hidden Cameras try an impromptu acoustic set nonetheless and somehow pull in one of the biggest crowds to the front as people gather to hear better. And their bombastic style translated beautifully to the hotch potch collection of instruments they could get their hands on and still get a sound out of. 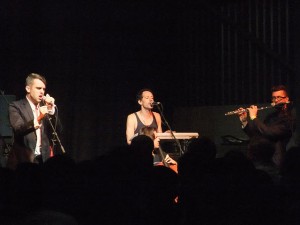 So Collins is set up in the indoor stage following Milky Wimpshake who are blistering through a set in almost sheer darkness. The electrics are fixed. The normally boomy indoor stage produces a crisp clean sound because it’s absolutely packed with pretty much all 1,000 of the festival goers, and Collins comes on.

At least we think so. Victim of a double brain haemorrhage in 2005, Collins performs his set seated, struggling to muster much in the way of banter between songs, yet his voice still fizzes with power, his delivery upbeat. As the set plays out, we get the crowd pleasers – Rip It Up – and finally the Ivor Novello award-winning artist stands for his hit A Girl Like You. There’s a collective recognition that we’re getting a rather good deal for our ticket price in this three or four minutes alone. 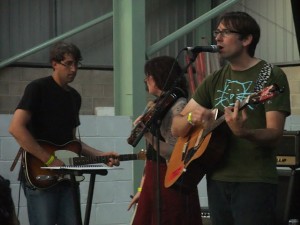 So, that was one very small part of the Saturday. Yet you’d have been more than satisfied if the day had ended on Math and Physics Club‘s sensational set of breezy, guileless songs, particularly ‘Lisa’, about the charms of a girl bass player. Apt given that The History of Apple Pie, who were on before them (successfully sounding not a million miles away from last year’s headline act The Pains of Being Pure at Heart) featured just such an asset.

The weekend had been building up quite nicely, what with Pocketbooks opening on Friday. Anther highlight was Suburban Kids With Biblical Names pulling off a great show as the headline – an almost trademark Swedish-indie sound (think Billy the Vision, even I’m from Barcelona) with some very cool, almost jazz (yes, I said it) chord progressions. 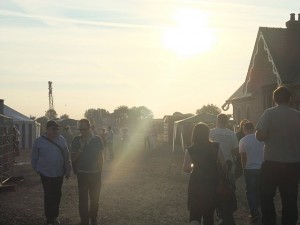 But after Collins on Saturday, Sunday looked like a tough day to perform on. Highlights included Papa Topo (which I assume must mean Daddy Mouse), Majorca’s answer to a wayward piano lesson spooned into three-minute sparkly pop songs, if that ever needed an answer.

Sloppy Joe was the most unlikely of surprises, with the Tokyo band producing an incredible Smiths-y set – and drawing an enthusiastic crowd where there had just been bare grass in front of them as they opened. 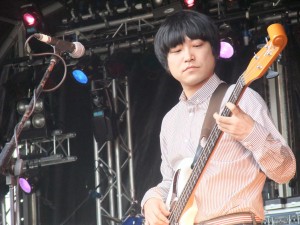 Madrid’s Zipper were great on the indoor stage, with driving fuzz-warm tunes carrying cutesy vocal lines that could have come from a kids’ TV show they were so upbeat. While in the church, MJ Hibbett singing with A Little Orchestra was a treat for those lucky enough to get an ear through the door.

And then Jeffrey Lewis happened. His band the Junkyard seemed to the ones in charge as they were setting up. Lewis looked like he’d wandered on from the audience. Until he took control of what was a tour de force. It’s supposed to be anti-folk, but that’s probably because he’s a genuine individual talent, a true auteur – what do you measure him against, except what he’s not. Making up the set as he went, he tore through songs, often starting them up himself and shouting titles to the bassist (his brother) and the drummer, daring them to keep up. 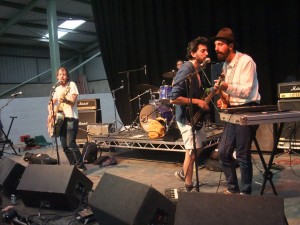 Songs map out his acrobatic thought patterns with engaging, rhythmic lyrics. Almost Sly Stone in their simplicity, Leonard Cohen in their sophistication and scope. You could cast aside his rap about killing mosquitos as a gimmick, but as a showcase for his literate wit it’s undeniable.

The audience were genuinely quite angered that they couldn’t weasel an encore out of him.

So how do you keep the roof off after that? Crystal Stilts turned the indoor stage into their own dark church of post punk. Singer Brad Hargett  swayed on stage like a reverend Bob Dylan, with tousled hair and shades, delivering the songs over a wall of noise. Between numbers he didn’t say a word. And the whole thing was utterly compelling. 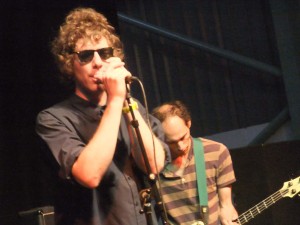 And then there was nothing left but Herman Dune. Looking like a Canadian Mountie lost in the Alps, the French troubadour delivered a masterclass of song writing. More folk than indie, certainly in sentiment, but there’s no doubt he was the perfect headline to an Indietracks that surpassed all expectations

Indietracks have made available an excellent 40 track compilation, featuring the bands who played at this year’s event,  on a pay what you want basis.  All proceeds go to The Midlands Railway Centre that hosts the event.  Click here to download.