In the beautiful countryside location of Eridge Park, near Tunbridge Wells, The Playgroup Festival entertained about 2000 people in its second year in existence. Unusually, for a music website, I’m not going to talk a lot about the bands and there will be very little reviewing of what occurred on the stages, I’ll try and sum up the (ahem) vibe of the festival instead. 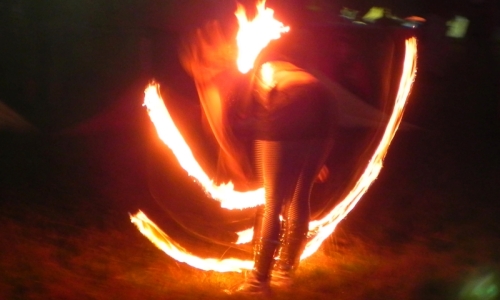 The biggest plus point, and the real success story for the organisers, is just how into the spirit of the event the attendees were. The theme was woodland animals, and each ticket came with an accompanying animal suggestion, foxes, hares, badgers and the like. More than 50% (75% at times I’d estimate) of the people you saw had some sort of costume or facial decoration in fitting with the animal theme. This may be off-putting to people who don’t want to dress up, but there was never a sense that people out of costume weren’t invited to the party, and it made for a constantly interesting visual spectacle. In this way it put the End of the Road festival to shame, the theme there is very loose and for all that it is a wonderful event it does seem like people are reluctant to let go and have any fun.

Along with a variety of stages, tents and stalls at the event was a central hay bale arena. In this arena a variety of sporting contests were carried out pitting one animal group against another. One minute you might see a fox narrowly beating an owl in a backwards sack race, the next you could get involved in a badgers vs. hares tug-of-war. 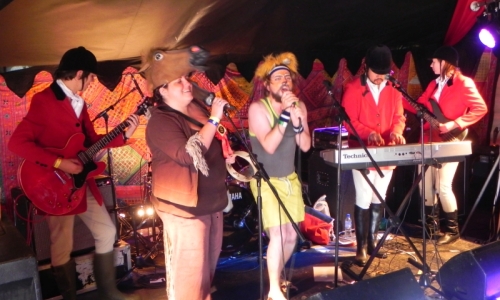 The musical acts on show were not big names, and very few of the attendees would have been attracted by the names on the bill. What we were treated to was a consistently high quality of acts, and a very wide vareity of musical styles across the site. I don’t know the names of many of the acts I saw (the lack of an easily accessible programme being one of the festivals organisational issues) but the mixture of folk, hip-hop, ska, pop, electronica and more was enjoyable, unusual and I enjoyed the freedom to go where I wanted and see what was happening without being at the mercy of a schedule. Of the acts that I can name ska band Los Albertos deserve a mention for their rapturously received Friday night set, the sprightly folk of Early Ghost was a lovely discovery and Super Janet proved to be the best wedding band at the weirdest wedding you’ve ever been to.

OK, in order to move up the festival league tables Playgroup may need to look at bringing in a better known headline act in the future, but I would much rather they continued their policy of booking interesting high quality music rather than booking a b-rated “name” on the bill (a role Razorlight are performing at a number of small festivals this Summer).

The other entertainment available, from cinema to burlesque to cabaret and DJs was of a similarly high standard and fun to be had from stumbling into a tent and seeing what was on offer meant that the evenings never got boring despite the relatively small site.

I’ve taken a while to get round to writing this review and it has given me the opportunity to talk to a number of other Playgroup attendees and get their feedback on the festival. The great majority had a very good time and loved the informal (if slightly shambolic) atmosphere, and the overwhelming response is a thumbs up for the event.

Some common issues have come back; the early finish, the number of toilets and lack of showers, the crowded feel in the camping area, no access to cash and food stalls running out of food. Most of these are down to the size of the festival and the need to balance the budget when selling enough tickets and provide sufficient facilities. I also felt that the main stage could have been sectioned off in a separate area to give the site more sense of space and give the main acts more of a feeling of occasion.

However, a small festival has to work hard to get the right balance between the elements that make it fun and unique and the practicalities. Leaning too far towards the practical can ruin the mood, but staying too informal means that the festival can’t grow and develop. I hope that the festival returns next year with a sensible size increase, some new facilities and a few lessons learnt from this year. I also hope that the sense of fun and freedom that marked this year’s event is still evident.

At a time when so many uni-kit festivals are failing to make money, or being cancelled, it is great to discover a festival that offers a truly different experience. I’ll be back complete with a full body otter costume next year.