The Monks were among the most curious of bands. Formed in the mid 1960s they were completely out of their time, had haircuts of actual monks, dressed like The Beatles, sang like Iggy and the Stooges and punk bands of the late 1970s, dabbled in feedback and influenced a diverse group of artists from Jimi Hendrix to Henry Rollins.

Created in 1964 by five American Gis stationed in Germany they were originally called the Torquays before being taken under the wing of two aspiring music managers, design students Walther Niemann and Karl-H.-Remy.

Remy and Niemann spotted a difference in the band to other so called beat combos of the time. Put simply it was an edge, which they drew out with marked effect. 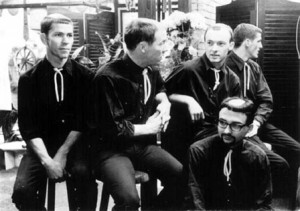 Musically it was punk before its time all wrapped up with tribal drumming and screaming vocals.  Melody went out the window. Feedback, meandering organ solos, distorted bass and even an electric banjo. It was the most unusual of sounds.

As if that wasn’t enough to mark out The Monks Remy and Niemann’s bizarre sense of design saw the band ruthlessly remodelled. Ordered to dress entirely in black on and off stage at all times, they also convinced the band to even shave the tops of their heads into real monk cuts.

After leaving the army the band stayed and played relentlessly around Germany and picked up enough of a following to interest Polydor, who signed them up.

Within three years of touring and beset with in-fighting they were left exhausted and called it quits. What they left behind was some early demos, some average later singles and just the one album, the fantastic Black Monk Time, the only time the sheer insanity and trail blazing qualities of the band were captured on disc.

Recorded in the early hours after they had played in venues in Germany Black Monk Time successfully recreates the energy of their live shows.

It can sound niaive in places lyrically and now almost 50 years on a little old fashioned, but remember this was 1966. What is perhaps most striking is how basic it is. The break up song ‘I Hate You ‘offers no thoughts of melancholy and confused angst just in your face lyrics such as  “I hate you baby with a passion.”

Black Monk Time is one of the oddest record you will here. Of its time, with its Vietnam lyrics and 60s sound, yet so ahead of its time with its do-it yourself garage band punk ethos. The album was re-released in 2009 on Light in the Attic Records in a pretty good package that features a booklet about the band and a bunch of extra tracks that show the toned down direction Polydor wanted them to take through the singles ‘Cuckoo’ and the lame ‘Love  Can Tame The Wild’.

Perhaps Black Monk Time was the best the band could ever manage. It’s hard to tell, as the band were left shattered by touring leaving little energy for further creativity. The Monks singer and guitarist Gary Burger said of the break up. “All of us were skin and bones. Worn out physically and mentally, It was hard business and The Monks really took everything that we had.” They certainly gave it all on Black Monk Time, one we recommend for the most bizarre slice of medieval 60s punk you will ever hear.

For more information about The Monks visit here