They Might Be Giants (TMBG) are unlikely to ever escape their reputation as over-clever novelty hit makers. And given their primary career these days is writing music for children, I doubt they care too much what the mainstream musical audience thinks of them.

I first became aware of them when I saw the video to ‘Don’t Let’s Start’ on the Chart Show back in 1987. To me they were a revelation, guitar pop played, with a sense of humour, by a pair of New York geeks. This was exactly the music that a indie guitar pop obsessed geek was looking for.

My first TMBG purchase was their second album, Lincoln, in 1988. It is a record that stands as the greatest artefact of a truly unique band.

The opening track, ‘Ana Ng’, is worth the price alone. Jerky, stomping and melodic, it is a brilliant 3 and a half minute pop song, and the first single released from the album. The basic elements of the TMBG sound are all there, fuzzy guitar, accordion, drum machine and the New York geek vocals of the two John’s (Flansburgh and Linnel). 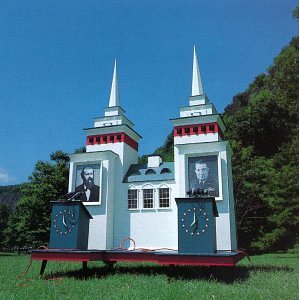 The albums other single, ‘They’ll Need A Crane’ is another near perfect pop gem, and showcases the sweeter less flippant side to the band’s song writing. Whilst most of the songs on the album are more lyrically playful this song deals with the painful collapsed of a relationship, all set to an infectious bouncy melody.

There are plenty of more superficially throwaway tracks on the album, ‘Santas Beard’ and ‘Piece of Dirt’ are unlikely to win the band any new fans, but the songs have humour, sophistication and inventiveness. Any music fan who comes to this album with an open mind will soon find plenty to love. Style-wise alone it covers an impressive breadth, from pop to jazz to rock to music hall.

In many ways the perfection the album is the way it balances quirky instrumentation and nonsensical lyrics with an expert command of melody and an understanding of pathos and wordplay. To the listeners who could see nothing more than a wacky novelty act these characteristics were lost, and the Dave Lee Travis endorsed smash hit ‘Birdhouse In Your Soul’ would pretty well cement the reputation.

Looking at the band as a pop act is a mistake. They started off as a performance art act, and in many ways that is the best way to approach them. They Might Be Giants are witty, inventive, masters of melody and truly unique; never more so than on Lincoln.