As a callow teenager, XTC’s Andy Partridge dreamed of one day being in a band that sounded ‘just like what I could hear coming out of the radio’ – which, at that time, meant the most unapologetically out-there material of Pink Floyd, the Small Faces, the Byrds and the Beatles, as well as a veritable slew of now-forgotten or barely-remembered one-hit psychedelic chancers like Zager and Evans and The Moles.

Even after growing up and scoring a string of new-wavey hits with XTC he still dreamed of making a record ‘like all those records I loved as a schoolboy’ – and in 1985 the band was finally given the chance to record their very own psychedelic mini-album under the pseudonym The Dukes of Stratosphear. Called ’25 O’Clock’ it sold so well (embarrassingly, rather better than XTC’s last ‘proper’ album) that a full-length follow-up was commissioned two years later, and unleashed upon an unwary universe as ‘Psonic Psunspot’. 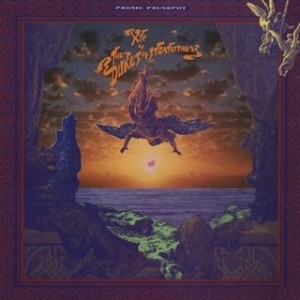 Although its reference points are generally less esoteric than those of its predecessor, Psunspot still has enough trippy oomph to bring a twinkle to the dilated eye of any psych enthusiast.  But there’s also a lot of stuff that even normal people can ‘get’: the Syd Barrettesque ‘Have You Seen Jackie’, the none-more-McCartneyfied ‘Brainiac’s Daughter’ and the dazzling ‘Good Vibrations’-era Beach Boys pastiche ‘Pale and Precious’ – which noted Brian Wilson überfan Dominic Priore pronounced as ‘the most exact replica of the California sound’.

For me, though, part of what makes the album such a pleasure is the fact that the replicas aren’t always exact; that, as well as sounding like Pink Floyd or the Beatles, the Dukes can also sound quite a lot like XTC, and I LOVE XTC!  From this perspective, listening to psongs like ‘You’re My Drug’ or ‘The Affiliated’ feels a little like poking at the beard of a pstrangely pswirling Psanta and catching sight of your dad’s face underneath: faintly alarming for a moment or two, perhaps, but ultimately something of a freaky relief – and funny, too!

The album’s 1987 release date proved fortuitous.  Acid house was just getting started and the baggies were just around the corner – miraculously, ‘hippy shit’ seemed to be coming back in.  The Dukes soon developed a cult following and, fittingly enough for a band whose primary raison d’être was to evoke their own influences, ended up influencing many younger bands (The Stone Roses reportedly chose John Leckie to produce their debut album as a direct result of his work with the Dukes).

Psonic Psunspot and 25 O’Clock were both recently remastered, repackaged and reissued.  If you’ve never heard them you need, I say NEED to get them; even if you already own Chips from the Chocolate Fireball (the earlier CD which collected both releases) you should probably still get them, just to taste the glory of the remastering.  Either way, buy NOW – while pstocks last!

For more information about The Dukes of Stratosphear and all things XTC visit Chalkhills.org