Have a quick scroll down to the bottom of this review and you’ll see something that rarely graces this site. That’s right, it’s a top score of 10/10. For those who are new to us we are not the kind of site that offers these out willy-nilly. In four years of reviewing I’ve only previously given out top marks to two albums, the recent reissues  of The Clash’s London Calling and REM’s Lifes Rich Pageant. This is the first time I’ve ever given a 10/10 to a new album. 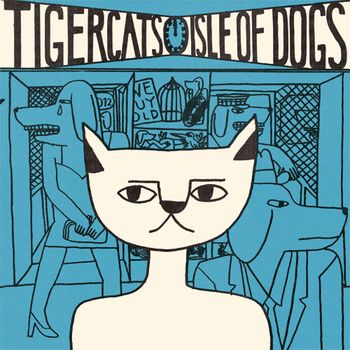 So what makes Isle of Dogs, the debut album by London band Tigercats, so deserving of our praise? Well, for a start, as an indie-pop album goes this is as good as it gets. It’s teaming with radio friendly, infectious hooks, especially on Full Moon Reggae Party, Easter Island and Banned at the Troxy. It also has a sense of completeness  as the band take you on an indiepop road tour across the east end of London.

The album starts with “a declaration of independence” on Coffin For The Isle of Dogs, for the “kids in their prams” and “commuters in their commuter trains” to  take control of “this island that has gone to the dogs.”

They then take us across Hackney Downs, for a dream like swim in Regents Canal “with the turtles and prehistoric fishes”, a trip to an indie record shop, bars in Dalston full of people with “ridiculous haircuts” before ending the day with a drunken stumble out of a nightclub, a spot of night swimming and a tale of love.

But it’s not all about catchy hooks and road trips around the capital, on an album that was largely recorded live at Soup Studios, Limehouse.  The thoughtful Kim and Thurston, with its simple but effective guitar arrangement is among the highlights. Is it directly about Mr and Mrs Sonic Youth, the coolest couple in indie rock whose relationship was ultimately doomed, a fictional couple, or a real life relationship of lead singer and song writer Duncan Barrett?  Kim and Thurston sounds like it’s a bit of all three. While their songwriting is direct it leaves just enough ambiguity to let the listener put their own take on the tracks.

There’s a humour to the songs as well.  I particularly liked the references to the one hit wonders of new wave on Vapours. And as an expression of teen angst and insecurity goes the Konny Huck line about smoking “so you won’t see me clear” is among the best around.

Across all of this there’s a uniqueness to their sound that blends Carter the Unstoppable Sex Machine and  intricate (what NME hilariously describe as “afro beat-tinged twee-core”) guitar arrangements, with the energy of The Wedding Present’s George Best, the irony of Pete Shelley and the intelligence of Hefner.

It is perhaps Hefner that they are perhaps most similar to in the way they capture city life so well in music. I’m sure this is a comparison that Barrett will not mind, seeing as he is a collaborator of former Hefner frontman Darren Hayman on last year’s Vostok 5 art and music project about space exploration. Fans of Hefner will also be amazed how much Barrett sounds like Hayman.

Putting all these elements together gives Isle of Dogs one of the freshest sounds I’ve heard for some time from a UK act. Plus, as we said when we touted them as one to watch this year, they are an indie pop band you can dance to. That’s actually rarer than you’d think.