Our Introducing section is usually reserved for new acts, but on this occasion we are devoting the space to someone who, from their time in Hefner, we have known for many years. However, after a nine year musical hiatus (between 2002 and 2011) he is back actively releasing new records. So consider this a reintroduction to Jack Hayter, in his own words.

Where is he from? “I assume the question relates to me not the songs. Originally from Devon via Liverpool. I have lived in that tiny part of London called Hither Green…more specifically that part called ‘Further Green’ for a long time now. Hither Green is famous for not much but train disasters and a very large crematorium. Also the place where, like me,  Spike Milligan learned to play the steel guitar. If the question was about the songs then I could tell you but its complicated.”

Who is he? “I am Jack Hayter. I write songs and play things with strings and old music software. I found myself by accident in a band called Hefner a long time ago and I have have been in two other good bands Spongefinger and Dollboy; mostly playing pedal steel guitar and other things with strings on. I put an album out called “Practical Wireless” on Absolutely Kosher records about 10 years ago, then got on with other things. I have been a motorcycle courier, a gardener a science teacher, a freelance computer network engineer and latterly a lucky person who trains the children of Thamesmead to edit video and create sounds. A couple of years ago I had a nasty heart attack and, shortly after that, Jamie Halliday of the Audio Antihero label contacted me and frogmarched me with prejudice into releasing an EP called Sucky Tart. I have not made him richer.” 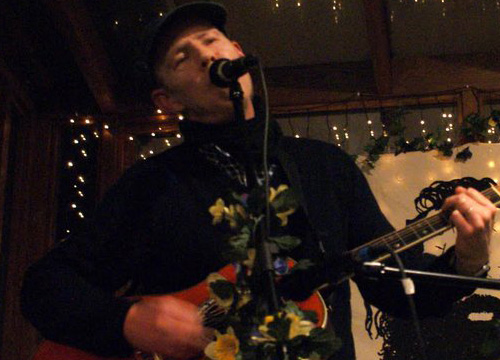 What does he sound like? “Ramshackle folk songs with bits. I’m not very good at assigning labels to music. I guess what makes a folk-song is not the instrumentation or the sound..more that it evokes a time and a place and tells a story. Thats what I try to do anyway. It doesn’t always work but I hope that the songs don’t sound mumford (with a small ‘m’ of course). In truth I really can’t sing. I have always had a bit of a complex about that since I was chucked out of the Okehampton School choir at the inaugural rehearsal when I was twelve. My pitching is so bad that even autotune can’t cope (well of course I tried it wouldn’t you!). So until someone comes along who wants to sing these you’ll have to put up with me doing it.”

What has he got to say for himself? “I have always found that way of posing that particular question semantically intriguing. If I say something “for myself” that implies that it is for my ears and not for others’ ears. I can think of quite a few home truths I might say to myself..some of them thoroughly disagreeable. Some sort of neural feedback loop might result in a rock’nroll exploding head so its best that I keep my own counsel from myself.”

What releases should you look out for? “Every month for a year from this April there will be a digital release on the Audio Antihero label. The series is called “The Sisters Of St Anthony”. He is the patron saint of lost things (or the Lost). The first in the series is “The Shackleton” which is about a phantom teenage pregnancy during the latter stages of the Cold War. The Avro-Shackleton was plane that was used to search for Russian submarines. It made a most distinctive sound. The other songs in the series will be mostly about lost people or lost possessions.”

To find out more go to www.jackhayter.com and to listen to (or subscribe to) The Sisters Of St. Anthony visit http://audioantihero.bandcamp.com/album/the-sisters-of-st-anthony-subscription-series.