Fresh from an enjoyable set at this year’s Indietracks festival, Vermont’s The Smittens are this month releasing their fourth album Believe Me. In true indiepop fashion, the release will be on clear 12’ vinyl on Fika Recordings, limited to 500 copies and complete with a digital download code, a recipe for cider-glazed doughnuts and a bag of rooibos tea (we kid you not). You can also buy a digital download version only but the former format sounds a lot more interesting. 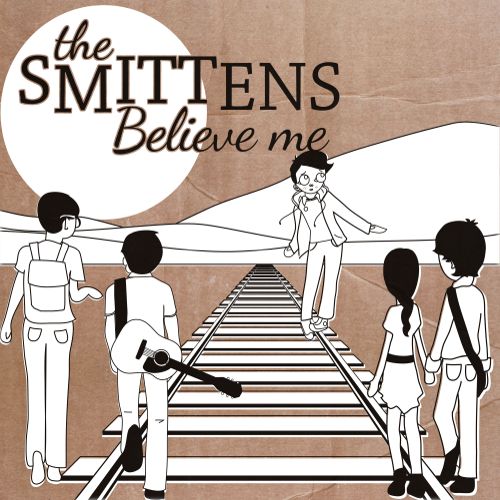 Believe Me showcases the best and worst aspects of the band. They craft  bittersweet indie pop, have genuine emotion when they sing and seem like a lot of fun. The problem though is that in sticking to the twee-indiepop path they have chosen to walk  so rigidly, they sound  just too similar  to their obvious influences, most notably The Magnetic Fields and Scottish twee-sters The Pastels . Along the way they have seemingly forgotten to be their own band.

We had a similar problem with Allo Darlin’s new album Europe this year. Sure the songs were good and the musicianship was great, but we’d heard it all before.  If you want to hear what our benchmark is for interesting, original indie pop  then Isle of Dogs by London’s Tigercats, or the self-titled debut by Brooklyn’s Hospitality are pretty good examples.

Anyway, back to The Smittens. Even though it sounds a lot like The Magnetic Fields and doesn’t push the boundaries of indie pop one jot, it’s still a fine and nice listen.

Typing, texting is an enjoyable ditty to start with with, some nice (that word again) three part harmonies and keyboard arrangements but by the second track Burning Streets of Rome I’m finding myself drifting a little; I’m not thinking “what a good song”, but “gosh, doesn’t Smittens singer Max Andrucki’s baritone sound an awful lot like The Magnetic Field’s Stephin Merritt.”

I’m back with them by the third track, Turn The Music Up, which has a good enough riff to keep me interested. And from fourth track First Bus till the end I’m less cynical, feeling pretty darn guilty about thinking they were just a Magnetic Fields rip-off and starting to warm to their sunny take on the whole indie pop genre. As much as I hate the word twee, The Smittens are surely up there with the twee-est bands around, although  they prefer the word ‘bubblegum’ to describe their pop, whatever difference that makes.

Despite my reservations I like this album,  and from what I can tell from those who have seen them live, they seem a likeable bunch as well, which is just enough to make up for their career- crippling lack of originality. The doughnut recipe and tea have also helped sway me.