It’s 7:30pm. The lights go down, and dark silhouettes spider quickly on stage to a frothily excited crowd. With barely time to plug in, Cohen and cohorts launch into “Dance me to the end of love” and the quietest stadium show ever witnessed.

A few calls of “Turn it up” go disregarded, so 20,000 pairs of ears just listened harder.

Cohen’s songs don’t need anthemic volume. They bring you closer to yourself rather than each other, and it’s in that that their universal appeal and commonality exists. They are songs you have always known – one suspects that archaeologists will one day dig up some palimpsest in a Jordanian desert and find Cohen’s lyrics written out in cuneiform, centuries before chromatic scales or Lydian modes were ever conceived. 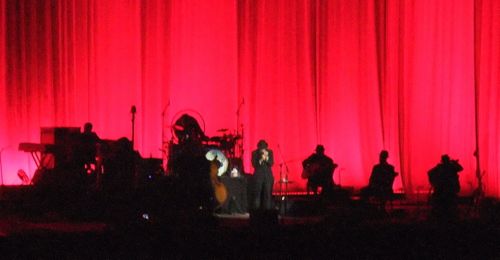 So it’s not so strange that this master of word and song somehow achieves such intimacy in this vast gawping hall of 20,000 “friends” as he refers to us here at the O2.

With the volume turned all the way up to 6, it’s a masterful trick. You can hear the audience gently singing along, rapt in their own interpretations and memories sprung from a stream of classics floating past: Bird on a wire, Everybody knows, Who by Fire, and we have barely got started.

Cohen’s rich baritone vocals are interspersed with his self-deprecating wit – abundant in not only lyric, poetry and performance (with a truly comic keyboard solo) but also in his between-song patter. And his spoken verse is just as spell binding as song, with the great hall drinking up every last syllable of “A thousand kisses deep”.

Alongside Cohen is assembled a troupe of master craftsmen (and women), particularly in the guitars of Javier Mas and keys of Neil Larsen. Mostly they are contemporary-ish in age to Cohen, and you might expect this low-key affair to have all the intensity of a Saga holiday.

Nothing of the sort. Cohen down on knees opposite the fire-fingered Mas, working his archilaud into a tonal frenzy made for some jaw dropping highlights.

If this reads like a Leonard Cohen love in – then no apologies, that’s exactly what you get. No support act, just three hours or so of the master at work. No rewriting of classics to seek out new audiences – in fact the one negative would be that the majority of the audience had clearly carried Cohen’s canon in their heads and hearts for years, decades even – there were very few young acolytes.

For an icon nudging towards 80, a self confessed recluse at the end of a multi year tour who can still put out an inspired performance – well if you can’t make the effort to catch him now, you’re missing out on music’s core curriculum. It’s time to get educated.