If it’s August it must be The Greenman Festival, pack up your troubles in an old kit bag, but don’t forget the umbrella, it is in Wales after all. The rest of the checklist is as follows, beer, pants, ok, that’s it let’s go.

This years line up was a salivating mix of traditional, well-established legends such as Roy Harper, and ex-The Velvet Underground member, John Cale, through to more modern festival favourites, The Villagers, Midlake, Band of Horses and The Horrors, as well as the strange, ethereal and uncharted waters with Olaf Arnalds, Moon Duo, Melody’s Echo Chamber. 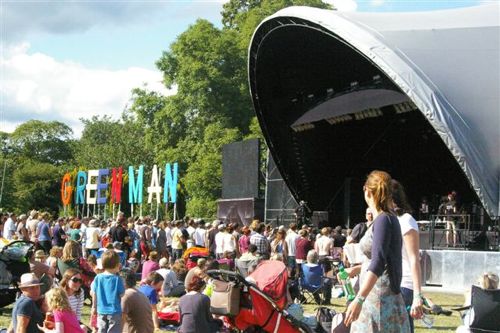 A week of fretting about the weather was unwarranted; previous years have seen some very wet conditions, but this year apart from late on Saturday night, the rain held off and for most of the weekend it was glorious, perfect climatic conditions for some serious psychedelic trekking.

The legendary Julian Cope beamed down from whatever planet he now resides upon, to chat about his new book, Copendium, a huge tome in which he unearths, vividly dissects and writes with a hyper-critical eye about all those mega unknown, but no less worthy, bands and artists that exist in the margins.

Cope also talks floridly about his forthcoming projects and gives us his unique perspective on the creative process. Perhaps I should mention the fact that for the entire interview our loquacious raconteur is in full on rock ‘n’ roll mode, huge gauntlets, military uniform chic, and what looks like a tank commanders peaked cap. Oh and he remains standing during the whole time clutching a mike stand. Best quote…’those people who stay in their bedrooms become legends’. 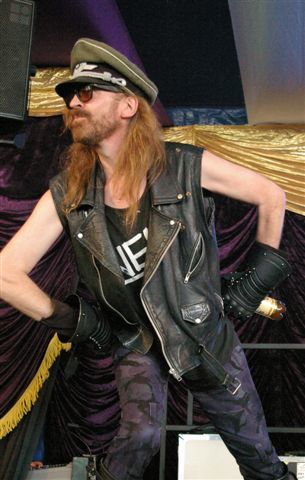 The wonderful thing about Greenman is its relatively compact nature, there is no great slog from one area to the next, it’s all painless, also great fun as you meet all manner of weirdoes on your travels. This years selection included a bunch of guys in white togas and sandals, pushing their mate around in a wheelbarrow who was dressed as Tutankhamun, a girl in a nurses outfit with a false bum and a saline drip, two guys in excruciatingly tight lederhosen, people dressed as chickens and tigers, and the occasional sun-God.

Whilst waiting for (what we anticipated as potentially the day’s highlight) the long overdue return of Midlake, quality time was spent in the company of the worlds greatest and perhaps only steampunk band, The Men That Will Not Be Blamed For Nothing, dressed accordingly in top hats, uniforms, and with all their songs referencing all things Victorian such as Jules Verne, Robert  Louis  Stephenson, self pollution, Brunel, and Whitechapel prostitutes. They win over an initially worried and perplexed audience of concerned parents and devil may care children, some of whom took great delight in singing along to the encore, Jesus Was A Cockney. Audaciously original and hopefully due some nationwide recognition sometime soon.

In the Far Out tent Beak hammered home their remorseless assaults on the senses. It was Germanic repetitive riff rock, in the manner of Neu!, but heavier and not so subtle. After a more sedate set from Dark Star, late additions to the bill, The Portico Quartet showed why they are so esteemed. Incredible musicianship and spellbinding rhythmic onslaughts were devoured greedily by an appreciative crowd. 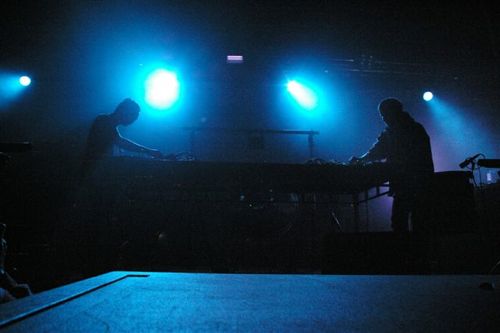 A sprint to catch Midlake on the Mountain Stage, and with an expectant crowd bathed in blue light and a new album to promote, the signs looked good. How disappointing then to criticize the band that gave us two of the best albums of the last decade, The Trials of Van Occupanther and the glorious Courage of Others. Vocalist Tim Smith has left and the result is like listening to the worlds best Midlake tribute band, great, but with a great big hole where those remarkable vocals used to be. Let’s move on.

For a bedtime treat we return to the Far Out tent to witness the remarkable Fuck Buttons, my notes reveal a descent into hieroglyphics as I run out of words to describe the live experience. The guys face each other with  banks of equipment that wouldn’t look out of place in the Tardis, creating pulses of sound that ebb and flow mightily above our heads, their non descript figures becoming more animated as the frequencies mesh and bubble, and with a head crunching light show to match the sounds, the result is phenomenal. Don’t ask me what they played, I have absolutely no idea, it’s not important. 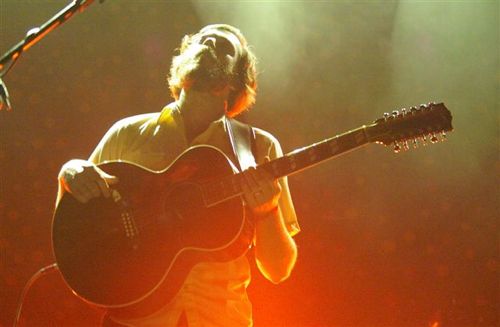 In the Last laugh tent, late night giggles were expertly provided from the very rude Bethany Black and the very mental Andrew O’Neill (imagine an anorexic Eddie Izzard). A quick crumpet and time for bed.

Saturday, fortunately still no rain despite the doom laden forecasts, a useless performance in the pop quiz and on to Greenman Rising (the new bands stage), tucked away amongst trees and a pond. It’s a lovely addition to the site. Cosmos Collapse kick off Saturday’s bill with a sound that veered from early Seventies Curved Air to Talking Heads, an unusual mix but very engaging, a bit proggy but only mildly so and not enough to frighten the horses, nice.

On the recommendation of some horribly young people, a journey to the Chai Wallahs is called for, they told us to check out We Were Evergreen and found a multi instrumental folky band that aren’t  Mumford and Sons and  so it’s ok to like them. They do all their own material, upbeat, uplifting, life affirming groovyness that could quite easily lend itself to world domination, but in a good way. They went down a storm, justifiably so.

Time moves on disjointedly as the dour tones of John Cale singing Fear is a Man’s Best Friend echoes around the valleys. Low turn in an intense set of brooding malevolence and their version of Neil Young’s Down By the River is immensely satisfying. 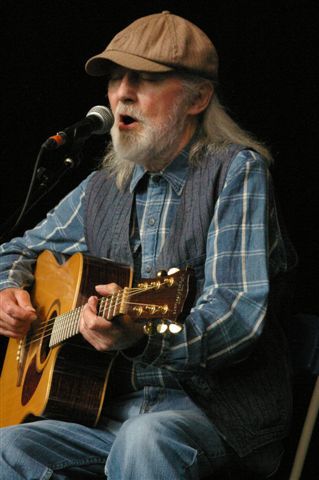 For many, myself included, the highlight of the entire festival will probably be the appearance by a sprightly and grinning pensioner, the absolute legendary Roy Harper. Greeted with huge warmth he plays just five-lengthy numbers. They all hit the button, they all contain more lyrical dexterity and poetic imagery than you could shake the collected works of Shakespeare on a stick at, and his guitar  playing is jaw dropping to the max, Highway Blues, Me and My Woman, One Man Rock ‘n’ Roll Band have never sounded better, and as for the encore as we stood silent in our reverence in the drizzling rain, he played When An Old Cricketer Leaves The Crease…I wasn’t the only soul to be moved to tears. Just when you think music can’t stop you in your tracks anymore here comes this elderly bearded guy with a guitar and a voice to lay waste to the hordes of the apocalypse to prove you wrong. God bless you, Roy.

Back to Far Out for some dirty blues based grunginess from the ever dependable Archie Bronson Outfit. Their tracks Cherry Lips and I Am A Disco Dancer broke through the sound barrier. Best drumming of the festival award goes to the Archie’s Mark Cleveland.

Quite surprised to find Jon Hopkins had turned into The Aphex Twin, the late night, early morning slot was just him, a laptop and what sounded like Kraftwerk’s soundsystem, not a guitar in sight he proceeded to turn the far out tent into Creamfields. Electronica in excelsis. 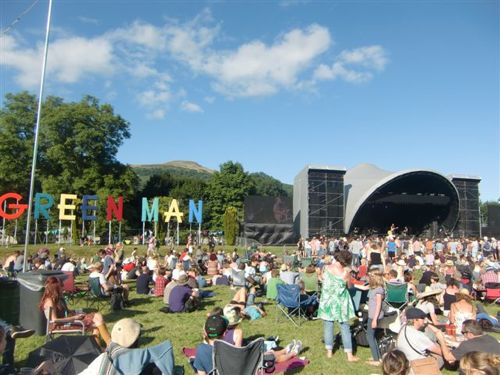 Finally Sunday arrives bringing with it sun, more sun and in the afternoon more sun, but with beer.

Opening act on the mountain stage are Fernhill, a quartet who do lovely. Highlights from the walled garden included Cowbois Rhos Botwnnog, who curried favour immediately they did a cover of Wild Mountain Thyme, but then morphed into Crazy Horse. They were brilliant, as was Darren Hayman with his finely honed and annoyingly tuneful! Songs. Here is a guy  who is one hell of a singer/songwriter, his band were pretty bloody hot too! 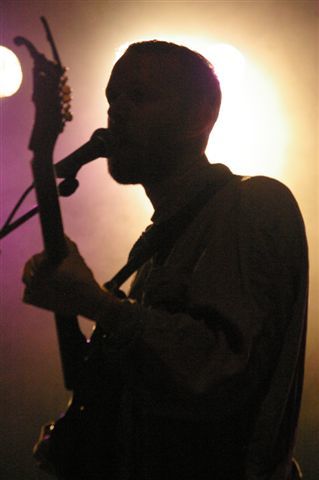 In need of volume and intensity, we embraced the excessive but impressive Unknown Mortal Orchestra and Woods, but Melody’s Echo Chamber simply took the place to pieces, they created a swirling pop heaven. It was like Slowdive on acid, and with the beautiful Melody  herself on vocals and minimalist hand waving it was so dreamy a large percentage of the crowd simply melted into the floor. OMG etc!

Public Service Broadcasting are getting so popular I’m worried about the backlash, until it comes let’s hear it one more time for Spitfire, Everest and Night Mail, despite some sound problems they made lots of people very happy in the Walled Garden. 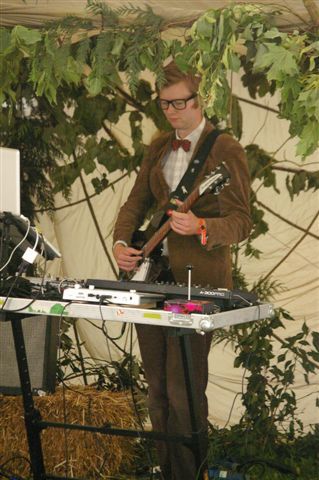 Exhausted now, but with enough memories to fill a Rough Trade tent, we bade a fond farewell to our favourite festival, five years and counting, nothing comes close.

Honourable mentions go to the following acts, The very slick Horrors, a remarkably bouyant Ellen and the escapades, Moon Duo, Kings of convenience, Sweet baboo, Lau and  This is the kit, they all served with great distinction and gave their all in the name of rock n roll !.