Wiltshire’s Super Squarecloud were one of our three nominations while helping to compile the longlist for 2013’s Glastonbury Festival Emerging Talent Contest. This was   based on the strength of their track Lolly Moon, a brilliantly odd and original slice of math rock.

As a result we’ve been eagerly anticipating their debut album, which is more of a mini-album, weighing in at around 30 mins across seven songs. 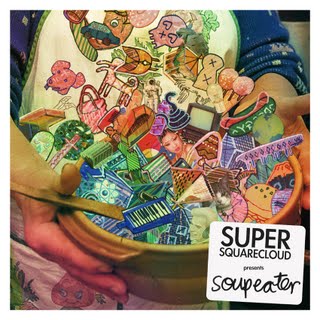 So what makes us like them so much? It’s probably a perfect storm of circumstances. They come from Wiltshire, which for any band worth their salt means they are influenced by the ambitious pop of the county’s best known band XTC.

In Jo Ford they also have a great singer, with her soft vocals proving a perfect foil for another key asset, their jerky, angular rhythms and melody. It’s no wonder that Mr XTC himself Andy Partridge is a fan, according to his Twitter feed.

While their brand of math rock is not immediately accessible, there are accessible moments. Take the track Walk it Off for example, which at it’s heart is a great guitar pop tune, even if it strays into odder waters at times. The same can be said of Nice Beach, which diverts here and there into rock from its soft pop beginning.

Opener Happiness Is All Of The Above is also deserving of a mention, starting with the twinkle of chimes the song comes alive with Ford’s vocals and one almightily funky guitar chord riff.

Sanguine’s groove also works really well  as it emerges from all the twists and turns of this track  presents along the way.

And so we come to the end with Lolly Moon, our favourite track, and a fitting finish to a very solid debut, with flashes of brilliance that leaves us wanting more.

I’m also still unable to dance to their music and still marveling that the legacy of XTC is alive and well. But I  suspect like XTC they will be venturing a bit further out of Wiltshire based on this evidence. A genuinely original act that will no doubt get a bigger audience UK wide.