Since Metronomy’s Joseph Mount recorded 2006 debut Pip Paine (Pay the £5,000 You Owe) in the solitude of his bedroom, the project has since undergone a steady evolution that has resulted in a present day incarnation barely decipherable from these humble beginnings. Incrementally picking up musicians along the way, 2011’s The English Riviera was Metronomy’s first album featuring a full band line-up and it received near unanimous acclaim for its sunny, 70s Californian style pop. Follow up album Love Letters was released exactly a fortnight before tonight’s show, and its placing at number 7 in the UK has seen the achievement of the band’s highest chart position to date. 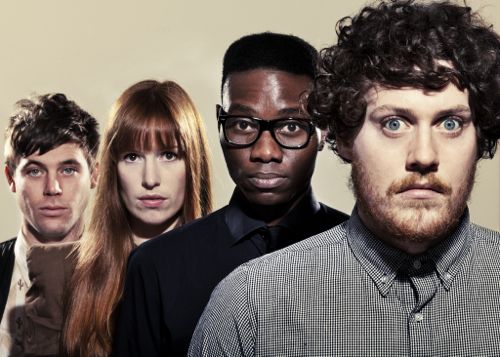 Wearing matching maroon jackets and dark trousers, except drummer Anna Prior who has the concession of a somewhat more feminine code of dress, the group start off with three tracks from the new album; title track ‘Love Letters’ is the last of these and, featuring a Motown influenced chorus delivered by a four way vocal, is enthusiastically received.

‘The Look,’ is the first track of the night to induce instant recognition as it begins;  a large cheer emerging from the crowd at the commencement of the song’s distinctively sprightly keyboard riff. Affection for tracks from The English Riviera is further apparent as ‘She Wants,’ with its backbeat guitar stabs and funky bass, produces more rapture from the audience at its intro.

Despite being relatively new as an ensemble, today’s Metronomy outfit is an efficient and fluid live music-making machine; this is evidenced in the band’s members occasionally varying their roles throughout. Olugbenga Adelekan stands out with the snappy grooves of his swaying, insouciant bass playing and his rousing high pitched vocals on tracks such as ‘Corrine’ infuse Mount’s melodies with a healthy amount of soul. Elsewhere, recent addition Michael Lovett capably shares his time between frenetic keyboard figures and sweet guitar jangles while Prior shares lead vocal duties on the gorgeous, acoustic guitar driven ‘Everything Goes My Way.’

Dispensing with the slightly gimmicky push lights that the band used to stick to their chests during performances, the current Metronomy live experience is nicely enhanced by the introduction of a synchronised light show that combines effectively with some of their high energy, danceable electro-pop tunes; during the instrumental breakouts on songs like ‘Holiday’ and ‘The Bay,’ these photic additions provide the stimulating air of a synth powered, communal disco.

The buoyant audience chanting of the letters that spell out ‘Radio Ladio,’ is perhaps the most obvious manifestation of their lively, sustained enjoyment while the considerable amount of youth on display sees to it that, for the majority at least, the Tasmin Archer reference during ‘The Upsetter’ is one completely lost in the ether. Following a forceful demand for an encore, the band return for three more tunes, the last being ‘The Most Immaculate haircut,’ during which Mount individually implores appreciation for his talented cohorts who make up Metronomy ’14.

Having toured various U.S arenas in support of Coldplay, Mount  has expressed his disinterest at emulating the heady commercial heights of Chris Martin and co. His decision to follow up The English Riviera with sessions at the notoriously retro, analogue surroundings of Toe Rag Studios in order to record a more insular and less accessible 4th album hints at this ethos. To evolve and challenge, rather than attain populism, seems to be Mount’s way. Now a cohesive five piece, Metronomy can only evolve further from here.