Anyone who has been following Django Django  on Facebook for the last four years will know the act are tailor made to curate the Late Night Tales series. From funk and soul oddities to indie obscurities their links have brightened up our  fix of Zuckerberg action on a daily basis. 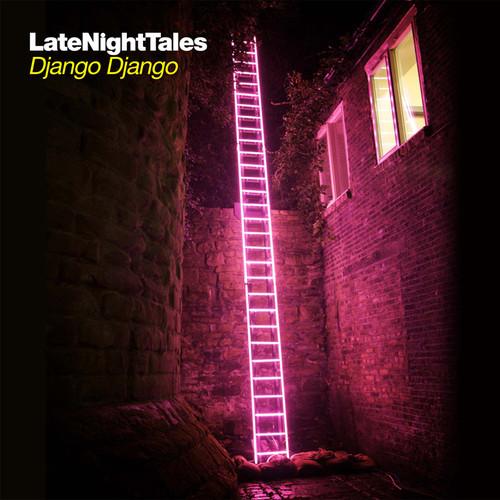 It must have been a tough gig for Django Django, the band that formed in art college and blends indie pop with Bo Diddley and electronica like no other, to narrow down their selection to the required 19 songs and one cover version as the latest Late Night Tales curator.

For the cover  version they have excelled with a modern shuffling, almost trip-hoppy take on The Monkees psychedelic pop gem Porpoise Song. This comes towards the end of their collection, just before the traditional spoken word track that always concludes each release.

They start proceedings well too, with Leo Kottke’s acoustic guitar track The Tennessee Toad creating a nice laid back atmosphere.

In the middle though there are peaks and troughs. Among the highlights are Game Love by Gulp, the little known Welsh act formed by Super Furry Animal’s Guto Pryce with Scottish singer Lindsey Leven. It’s a great choice and gives deserved publicity to this interesting band.

Another fine track to be unearthed is Bone by Map of Africa, the genre hopping project of Thomas Bullock and DJ Harvey. More well know stellar offerings are Surf’s Up by The Beach Boys and Massive Attack’s Man Next Door.

But what counts against the Djangos spell at the helm is a weaker final third, with OutKast’s Slum Beautiful and a Live Garage Mix of Roy Davis Jnr’s Garage falling a little flat.

Harry Nilsson’s Coconut provides some humour and Canned Heat’s Poor Moon some class thankfully  in what is otherwise a disappointing segment of the collection.

Albeit with some misses they’ve done a fairly decent good job narrowing down what must have been a long list of hundreds for this project. For raising the profile of Gulp and covering The Monkees they also get extra brownie points from us.