The first  Saturday of the annual Brighton Festival is one of the busiest nights on this south coast city’s social calender, with a raft of competing events taking place. It would therefore have been understandable if this latest gig on a brief Spring tour by Shearwater, the Sub Pop signed band formed by former Okkervil River man Jonathan Meiburg, was half empty.

But such is the growing reputation of the band as a live act they need not have worried ,as the Haunt was almost full and with a good, attentive crowd too, who were full of appreciative whoops and cries throughout. 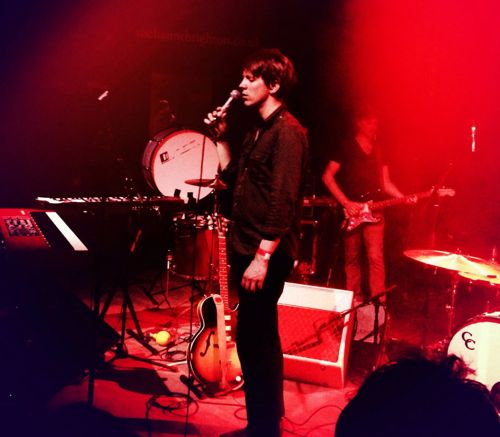 The band clearly picked up on this enthusiasm and gave them what they wanted, quite literally when it came to the encore as they played Snow Leopard, one of the stand out tracks on their second album Rook,  in response to a shouted request.

As Shearwater gig goers have come to expect there was plenty of environmental based banter from Meiburg, including his recollection of a dream featuring an orang-utan, the time vultures circled over their recording studio as well as tales of his childhood in Baltimore.

With their last album Travelers, a collection of cover versions, coming out last year this Spring tour was not album specific so there was plenty of chance to mine their back catalogue, including another crowd favourite  the title track of Rook.

Travelers tracks still got a good airing, including their rock anthem take on Xiu Xiu’s  I Live The Valley OH and  David Thomas Broughton’s Ambiguity. As is in keeping with Meiburg’s passion for wildlife and conservation issues this tour also includes recordings of birds and waves from the Falkland Islands, a favourite Meiburg destination, as well as  the sounds of sparrows and road builders from North Korea to bring their songs further to life. It’s not every gig you review you get to say that, but then Shearwater is not your average band.