The last time I saw Owl and Mouse perform was in a railway carriage at the Indie Tracks festival on a sweltering July 2013 afternoon. The carriage was packed and the sweat- soaked crowd of around 50 or so were left enthralled by this friendly band that is focused around the intimate vocal delivery and melancholy lyrics of Australian born, London based singer songwriter Hannah Botting. 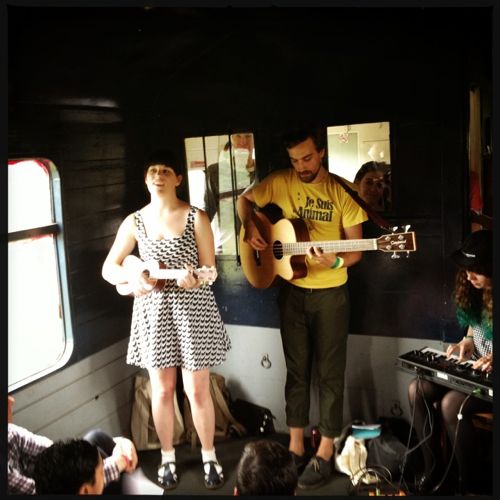 Owl and Mouse at Indie Tracks 2013

Using the template Allo Darlin’s Elizabeth Morris perfected on her track Tallulah, Botting’s delivery and subject matter are beautiful and sad in equal measure, especially on this EP’s standout track Don and Anna, about the hopelessness of the relationship between Mad Men’s Don Draper and his wife on paper Anna. I remembered it instantly from their Indie Tracks performance.

This is their first full EP from Owl and Mouse, following a couple of single releases and certainly has a nice full band feel, with bassist Tom Wade handed vocal duties on Western Skies, written by Botting about homesickness and further echoing Morris’s Tallulah.

Don’t Read the Classics is arguably the saddest of the quartet of tracks, unsurprisingly given that their press release tells me it is about the ‘rollercoaster of trust and subsequent disillusionment.’ The lyrics are harsh to say the least and takes the whole ‘divorce/break up’ song to new levels of bitterness, vulnerability and sadness. There’s someone out there who wronged Botting and is surely feeling more than a little sheepish right now.

Less is more is a key feature of the Owl and Mouse sound, especially on final track Terrible Things, which was previously available on last year’s Indie Tracks sampler. It’s wonderfully simple, with mainly ukulele and subtle keyboards from Emma Winston, who is also a regular with Darren Hayman’s band and Enderby’s Room. This gives Botting’s vocals added intimacy, which is crucial for a song like this.

Across the four tracks there is enough to show great promise and prove that Owl and Mouse grabbed a justified place on our bands to watch out for in 2013 list.

But not all four tracks work. Botting’s strength is creating three minutes within a song where she and the listener feel like friends. On Don and Anna, Terrible Things and Western Skies that comes across clearly as the listener is drawn in by her whispering delivery. It is hard not to form a bond with her.

But on Don’t Read the Classics the lyrics feel just that little bit too personal and its lack of subtlety jars with the other three tracks, threatening to break the nice illusion of friendship that Botting and Owl and Mouse had so expertly created over the rest of the EP.