There is definitely a real buzz around Viet Cong right now. The band have a highly rated new album, a sell-out tour and an interesting back story to their credit. What they don’t have is that many great songs, just yet. This isn’t meant as a criticism as they haven’t released that much music yet. About three songs from their Cassette EP and five of the seven songs from their debut album are all  pretty great, but that does only amount to eight songs in total. 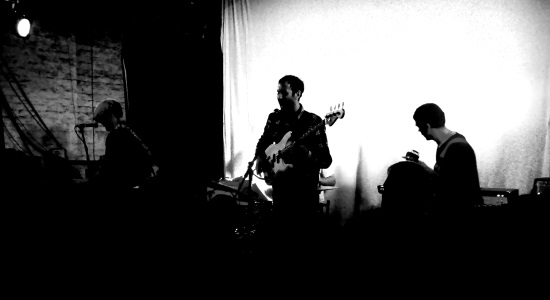 The first set of songs come from the EP and ‘Oxygen Feed’ is just as wonderful a piece of twitchy pop music live as on record. The feeling that everything is about to collapse, but never does, is part of the songs charm and a key element of that EP. In contrast the songs from their album sound assured and ordered, they sound like a band that has decided on what it wants to be.

Different songs fare better in the live environment, with ”Bunker Buster’ in particular shining tonight as a wonderful piece of sonic bombast. ‘Continental Shelf’ in contrast loses the perfection it displays on record, the driving bass and drums are all there, the chiming guitars sound great, but the subtlety of melody, especially in the vocals, doesn’t quite come through.

In general though the band perform this brilliantly, and have enough humor about them on stage to offset the dour edges of the music. Album finale ‘Death’ is a particularly fine live performance and captures the bands best elements in 14 noise-filled minutes. The instrumental break in particular is fantastic, the repetition of sound is hypnotic and takes the audience to the edge of tolerance before breaking back into the song.

The only flaw here is that the song ends but it isn’t yet time to end the set and the band is persuaded to play another song, and this rather dulls the impact of their magnum opus.

The set lacks surprises, you know exactly which songs they are going to play from their slim catalogue. It feels like a festival set, not a headline, and it would work perfectly at an ATP festival or as part of the Great Escape.

These are minor criticisms though of a pretty great set from an act that is establishing themselves as one of the real bands to watch. We need to hear more from them to be sure if they are the real deal, but I’ll be first in the queue when they release their second album.