Theoretically it shouldn’t work, some of the pop world’s most era defining, critically acclaimed albums covered by a reggae collective from the environs of New York. No way is that ever gonna work. Radical reworkings of complex multi-layered songs re-imagined in a laid back chilled vibe would surely be folly, or at least a major own goal. 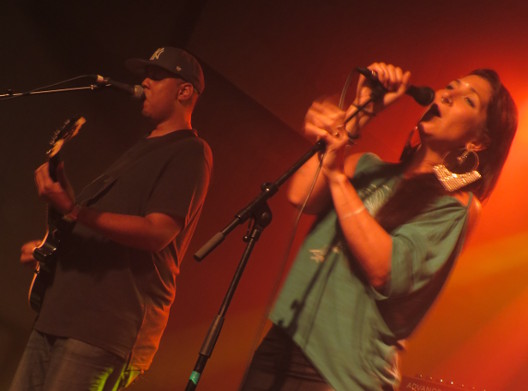 But this ever evolving line up of musicians and guests, going by the name of Easy Star All Stars, have been proving naysayers repeatedly wrong with their tremendously entertaining covers of classic albums such as Sgt Pepper, Dark Side of the Moon, Ok Computer and most recently Thriller.

Tonight’s show was billed as Radiodread, so I was naturally expecting the full on Radiohead set, but it transpired this was a greatest hits package covering all their back catalogue.

The band themselves are full of character. There’s the towering looming figure of Shelton Garner Jnr on lead guitar, one minute quietly playing rhythm, next tearing up the place with some searing solo as on Pink Floyd’s Time.

There’s a devastating duo horn section who literally blow us all away. The fantastically named Ras I Ray on bass is a wonderfully sensuous bass machine of a man laying down constant earthquake threatening lines. Meanwhile, a drummer and keyboardist keep up the rock steady rhythm in fine styleee.

But the focal points are Kirsty Rock on glamourous vocals and some sweet harmony, and the immensely likeable Ruff Scott, also on vocals as well as rapping and general encouraging the crowd to go nuts duties.

They are as likeable a bunch of folks you would ever wish to meet and their enthusiasm is contagious.

The set mixed it all up, from a surreal version of the Beatles’ Lovely Rita to a sublime take on Michael Jackson Beat It. Pink Floyd’s Money proved to be a great singalong and the Radiohead material, especially Paranoid Android, Electioneering and High and Dry (which by the way was some kind of genius), were transformed into something strange, otherwordly and affecting. Breathe and Time by Floyd were re-landscaped to play with your head and your dance moves.

For the encore they invited Ben Willis, one of  the vocalists from tonight’s very fine support band Shanty to come back and join them for a version of Karma Police, it was needless to say utterly brilliant.

These guys are no mere novelty act, they genuinely love the music they cover, it’s just a bonus that they are incredible musicians with big personalities in their own right.

The assembled brethren at Rescue Rooms tonight experienced a beautiful thing and acknowledged the fact by dancing till the cows came home, well, half past ten anyway.

Go see them, it’ll be the most fun you’ve had since it stopped raining at Glastonbury. Please come back soon guys, we need something to cheer us up in these austere times.