Bristol reggae act Laid Blak and the indescribable Flipron are among the acts playing at the second annual Glastonbury Calling one day festival in Glastonbury, Somerset.

This year’s event takes place on February 25th and involves around 40 acts across six venues: The Riflemans, The Hawthorns, The Assembly Rooms, The Market House, The King Arthur and The Bocabar.

Profits from the event will go to community radio station Glastonbury FM. 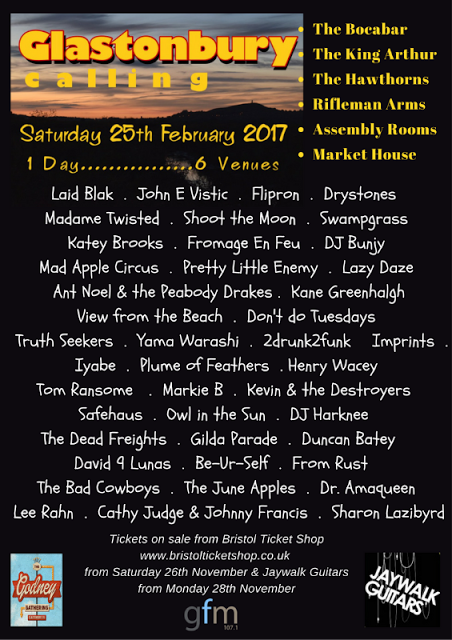 Highlight’s include an afternoon set (14:30 -15:15) at the Hawthorns Hotel by Glastonbury based Flipron. Describing them is tricky so here’s our latest stab at it – psychedelic pop band, trapped inside a fairground organ and forced to use the power of punk to fight their way out. Others have settled for the more sober “eccentric English rock”.

Laid Blak (The Bocabar, 22:30-23:30) are another highpoint, with the Bristol band currently one of the most talked about British reggae acts, with support slots for among others, Ed Sheeran, the Wailers and Lee Scratch Perry, under the belts.

Festival organizer and Glastonbury FM presenter Ian Liversidge said: “We want to highlight the variety of great new music from the west and show off the cracking venues in the town and show that the town is always full of great music

“We love the early part of the year as there is so much music coming out and we intend to get a jump on the summer festivals and show it off. This year we have an amazing line up over all of the venues and are chuffed to have the legendary Laid Blak headlining the Bocabar.”

Tickets for Glastonbury Calling are available in advance for £10 from Bristol Ticket Shop, Jaywalk Guitars, The Bocabar and The Hawthorns Hotel, or can be bought for £13 on the day.