Last year’s Glastonbury Festival was typified by Brexit fears and mud, lots and lots of mud. It was draining at times, both physically and mentally.

Thankfully, this time around it was a different story, with a post general election sense of hope replacing despair and lovely dry grass replacing ankle deep sludge. 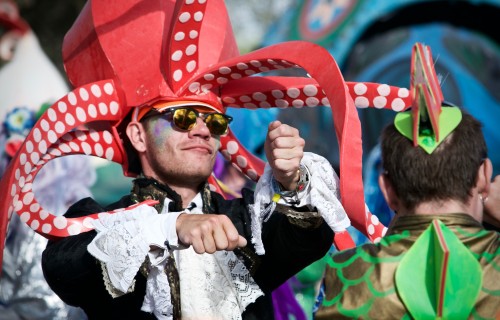 Already some, including  Glastonbury Festival organiser Emily Eavis, are referring to it as the best  yet. We are inclined to agree, especially as there seemed to be more going on this year too, to add to the good mood and weather.

New areas had popped up, including Cineramageddon, a Johnny Depp approved post apocalyptic drive-in cinema. Another was the punk and hardcore metal focused Truth Stage, defiantly nestled in the dance area, Shangri-La.

Surprise and high quality guest slots also sprang up, with Elbow taking The Park stage by storm on Friday evening and The Killers doing likewise on Sunday afternoon at the John Peel Stage. 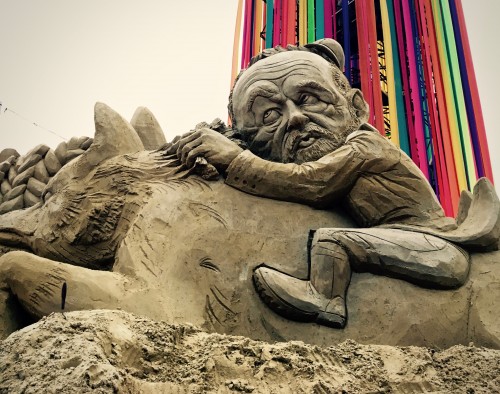 It was also the year of Jeremy Corbyn, with the Labour leader attracting one of the Pyramid Stage’s biggest ever crowds, while reciting Percy Shelley (yes, this all actually happened). His face was on masks and t-shirts and even a sand sculpture with the veteran campaigner astride a giant fox, ready to give chase to Theresa May through a field of wheat.

As with all our Glastonbury reviews, we focus more heavily on the smaller stages away from the main television coverage.

Our favourite venue on was on top form, once again showcasing quality emerging talent, including those destined for larger stages in future years. 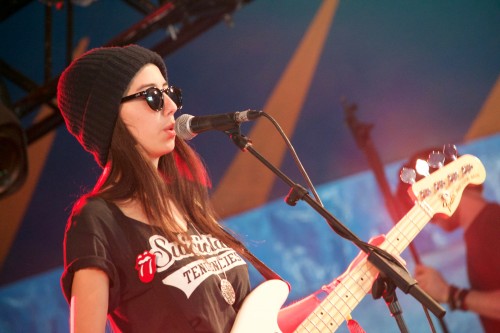 Among the William’s Green highlights were a Friday afternoon set from Argentinian trio Las Kellies, who sound like a garage punk version of seminal Athens band Pylon, backing their distorted riffs with smart, danceable bass lines and rhythms, on tracks such as Mind Your Own Business.

On just after were The Pictish Trail, aka Johnny Lynch from the Isle of Eigg in the Scottish Hebrides. Here with full band, this plump, bearded glitter faced singer excelled as a frontman, with his psychedelic, euphoric pop pulling in the crowds. 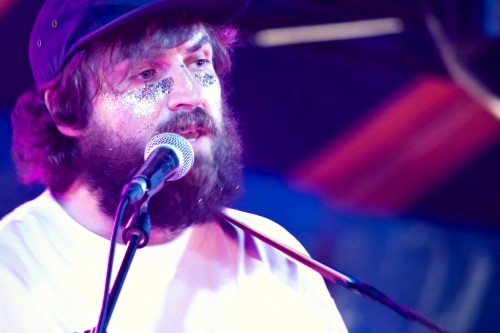 Dutch Uncles were another highpoint of the William’s Green line up and proving to be the best party band in the Metropolitan Borough of Stockport. Here to showcase their latest album Big Balloon, lead singer Duncan Wallis is a joy to watch, with his frantic dancing and soulful vocals. 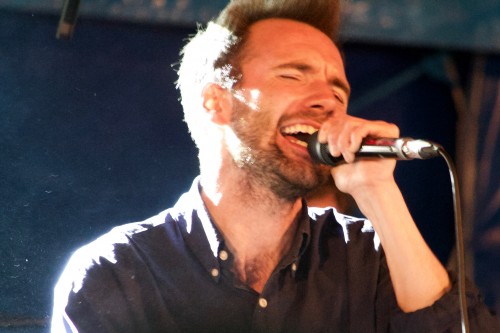 The Big Moon, a critically acclaimed quartet on Saturday’s bill already sound and look too big for Williams Green. I wouldn’t be surprised to see them on The Park, John Peel or even the Other Stage next time. Here they rattled through a strong set of tracks from their debut album Love in the 4th Dimension, which was released in April. 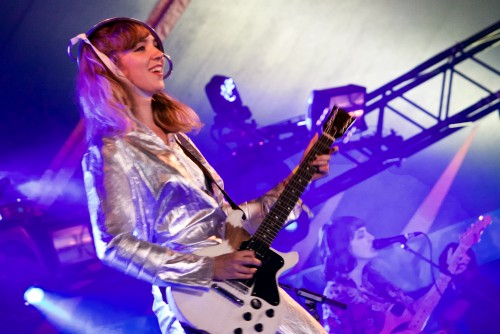 The last time we saw Thurston Moore perform, he  was one grumpy git. It was at an ATP Festival in Minehead after the release of his solo album Demolished Thoughts and he spent the whole set complaining about the sound and looking miserable.

Whether it was the sunshine, lack of mud, or Corbyn himself, but at this year’s Glastonbury Festival the former Sonic Youth man was in fine fettle. Making up for lost time he has plenty of stage bantz these days and smiled throughout, through his trademark long hair. Another factor in his good mood may be the fast paced incendiary content of his new album Rock n Roll Consciousness, which sounded great live. 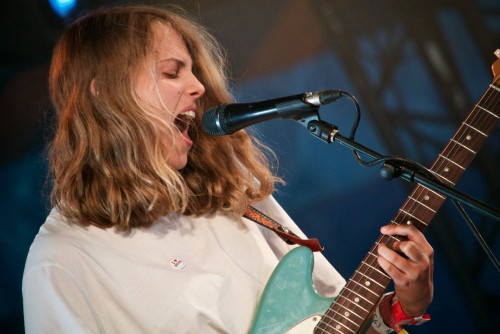 We managed to grab a couple more William’s Green acts on the Sunday, both equally impressive. Sub Pop artist Marika Hackman from Hampshire has an excellent album out this year, called I’m Not Your Man, which veers between grunge, folk and pop.

Live though she was far more on the grunge side, but with the voice of an angel. It was an enticing combination that provided yet another high point on this stage. A definite star of the future. 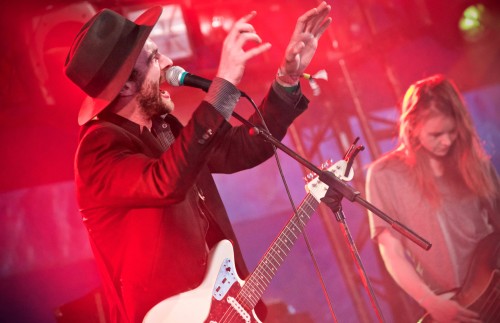 The Veils have been going for around 16 years. Why have we never seen them live before?  Their programme billing of ‘a savage collision of Bowie, Nick Cave and Nine Inch Nails’, is spot on, with frontman Finn Andrews definitely of the Cave school of impassioned down and dirty tales of horror. It is no surprise that Andrews features in the new series of Twin Peaks. A Lynchian act that seems criminally underrated.

The Park seemed to have significantly upped its game this year. Situated up the hill near the iconic Glastonbury Festival sign it can struggle to pull the crowds.

Not so this year.

As well as Elbow’s good natured and heart warming surprise set the venue also hosted what may have been the festival’s best stage headliner – The Flaming Lips.

With a Glastonbury Festival friendly set of hits, most notably those from their peak pop album Yoshimi and the Pink Robots (2002), frontman Wayne Coyne was on exceptional form. Like a psychedelic faerie prince he relied on his full repertoir of showmanship – blasting the crowd with explosions of glitter and balloons, rolling around in a giant ball across the crowd and even riding a giant unicorn at one point.

Those that shunned Radiohead on the Pyramid Stage at the same time to catch this set were richly rewarded. 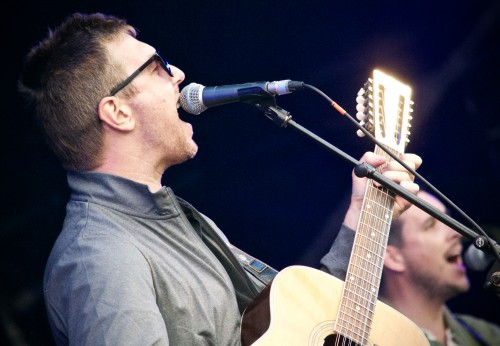 Hamilton Leithauser’s massive voice, and I mean properly massive voice, was another high point in the Park’s line up. Showcasing tracks from his impressive latest album I Had A Dream That You Were Mine, which was recorded with former Vampire Weekender Rostram, he dazzled in the Friday afternoon sun, delivering a fine set of shouty lullabies to perfection.

1,000 Times and The Bride’s Dad, about a determined father inviting himself to his estranged daughter’s wedding, were among the highlights.

The John Peel Stage had sort of lost its way over the last couple of years for us. The acts seemed to increasingly veer away from the Peel ethos of being interesting, to more a venue for acts that  produce a sort of bland power-ballad indie rock. 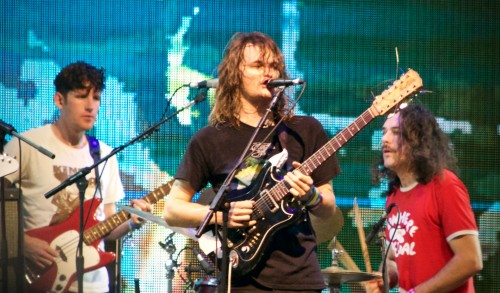 This year’s Glastonbury Festival though it seemed that a bit more effort had been made to mix that up a bit with King Gizzard and the Lizard Wizard providing one of its high points.

Peel – the early 1970s Peel at any rate – would surely approve as with a psychedelic backdrop the hardworking Australian act rattled through their extensive back catalogue, that includes an incredible 11 albums since forming six years ago.

Highpoints were the Nanogon Infinity segment, with Gamma Knife and People Vultures sounding excellent. Complete with lead singer Stu McaKenzie gurning and guitar noodling a plenty they also impressed with a fantastic finish featuring The River, a highpoint from their jazz influenced 2015 album Quarters.

Appearing on the same Sunday afternoon were Sundara Karma, a posh bunch of ex-public school boys from Berkshire who use smart riffs and hooks to ensure they avoid accusations of being bland.

While they safely avoid blandness musically they did provide the lamest call to arms in the history of rock, when lead singer Oscar Pollack said – “If you don’t like something, say something about it, but in a nice way.”  I’m guessing he wasn’t part of the debating society back at the posh knob Oratory School where they met. 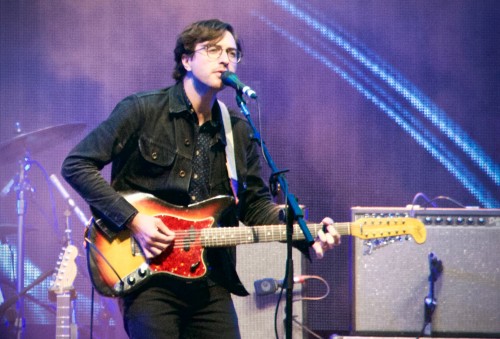 Real Estate also took to the stage on The Sunday and impressed us with their neat guitar interplay and REM like songs. They are a band that are far better live than on record, where they can sound a little lifeless, so it was great to catch their set.

Another favourite venue of ours at the Glastonbury Festival is the Acoustic Stage, a huge tent covered in giant red drapes and with one of the best sound teams on site. The crowd is a little older than the rest of the site, many of the acts are too, but it’s a great place to see some legends as well as new up and coming folk and roots acts.

Among the stalwarts were Chris Difford and Glenn Tilbrook, who rattled through a Squeeze greatest hits set with aplomb. Their vocal harmonies, (Chris the low one, Glenn on high notes), is one of the best in popular music. Glenn’s guitar skills, here on acoustic and clean Fender Telecaster are also astonishing- intricate but never showy. Hearing Up the Junction in this format was a particular treat. 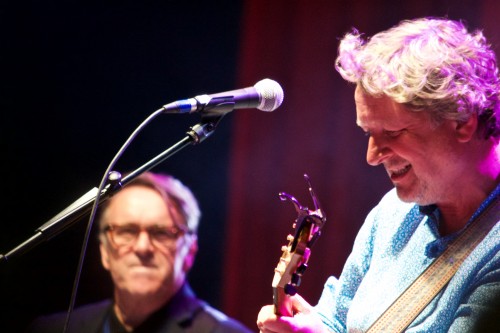 The Magic Numbers were another that graced the Acoustic Stage well, showcasing tracks from their forthcoming album on the Sunda as well as playing the crowd pleasers through their career and finishing on a sublime cover of Neil Young’s Harvest Moon.

The Dead Kennedys may be without their original singer, Jello Biafra. But it doesn’t matter these days as, on the evidence of their Saturday night headline slot at The Trust Stage, in frontman Ron Skip Greer they have a superb replacement. He’s theatrical like Biafra, full of political swagger, but doesn’t impersonate him. Grear is his own man and the Dead Kennedys legacy is in good hands. 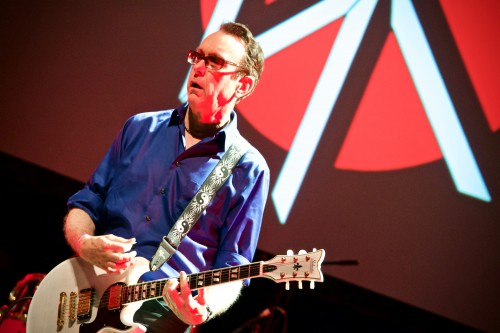 The rest though is the same, with drummer DH Peligro, who has been with the band since 1981, original bassist Klaus Floride and original guitarist East Bay Ray, all performing like it was back when they started.

To hear Ray’s abrasive surf riffs in person was a joy for us old punk fans. But it wasn’t just fogies like us there – what was great was how many young people were watching them. It was a joy to see how their music – which is as apt now in an age of Trump and May as it was in the Reagan/Thatcher era – chimes with a new generation.

The Other and Pyramid Stages

A sign of a good Glastonbury Festival for us is that we enjoy the smaller stages and larger ones alike. Among the Other Stage highpoints were The Pretenders cobweb busting opening set on late Friday morning. Unlike the dire rock dirge and shouty hoarse vocal performance of their contemporaries Blondie in this slot a few years back The Pretenders were superb. 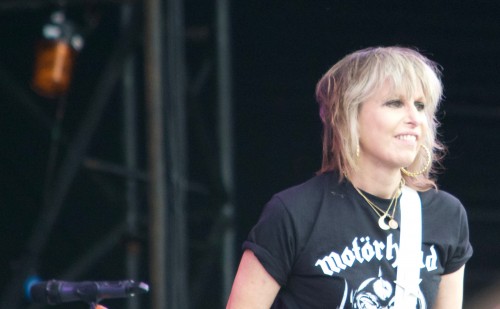 Not only are their new tracks pretty good, especially the title track of 2016’s Alone, but Hynde’s voice is pitch perfect. In addition the band were true to their roots, with Martin Chambers ,who joined in 1978, on drums and their guitarist and bassist sounding as near as they could to the late James Honeyman-Scott and Pete Farndon. Mystery Achievement, a lesser known track from their first album, was among many highlights.

British Sea Power were another good booking for the Other Stage, complete with dancing bears. 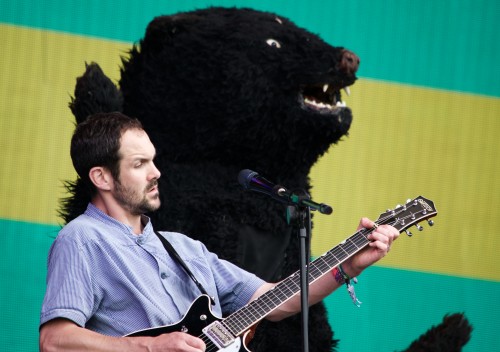 Meanwhile, on the Pyramid Stage Barry Gibb‘s Bee Gees catalogue provided the perfect soundtrack to a sunny Sunday afternoon, complete with flashmob disco dancing security staff. The veteran seemed genuinely amazed and touched to receive such acclaim. If anyone was at this gig and hated it then they must be dead inside. Heartwarming.

While The National’s was a powerful and passionate set of a headliner of the future, the passion and angst  seemed a little forced in places, especially the oh-so deliberately visible wine swigging and snipes at the band members from Berninger, in particular aimed at Bryce Dessner, who he accused of having too much camera attention.

Is their friction real or put on? Either way it didn’t help their performance. Having said that Fake Empire, from their album Boxer, and the tracks from High Violet sounded superb.