There are many notable Gibsons.

Here’s another for the list, Laura Gibson, a singer-songwriter of considerable talent. 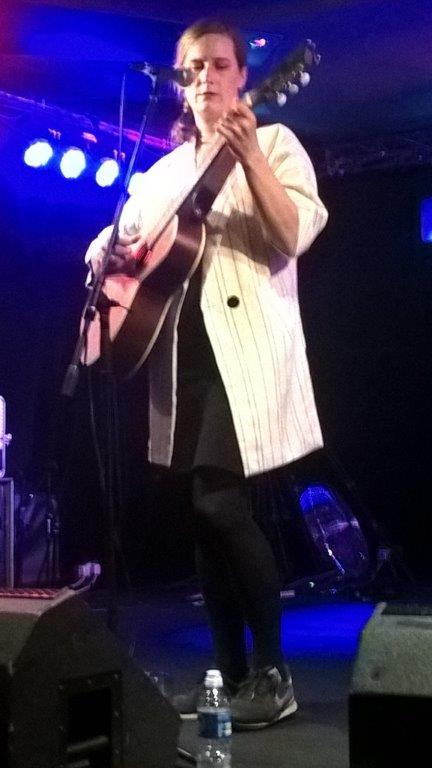 This Gibson hails from way out west in Oregon and now fresh from last weekend’s appearance at The Greenman Festival she is in the small convivial confines of the Leicester Musician – a great little boozer and the place where we saw a devastating set years ago from John Grant with Midlake before the accolades and awards.

Laura is now signed to groovy hip label City Slang and she’s on her third album. The latest is called Empire Builder, which references her journey on a train of that name and is sadly not a searing indictment of colonial Britain in the 1800s.

The album itself contains some beautifully executed accompaniments. But tonight she is performing solo. Just her with an acoustic guitar, some wine and a hushed crowd sitting at candle lit tables. It’s all very atmospheric, apart from me rustling a packet of Mini- Cheddars every five minutes (sorry Laura).

The album is played almost in its entirety and in the same running order. On the second number she delightfully apologises for repeatedly using the word damn in Damn sure! As if anyone in Leicester would be offended!

Not Harmless, the title track, The Search for Dark Lake and The Last One whizz by in a blur of concise and absolute beauty.

Two Kids is so catchy and upbeat you could almost see it as a chartbound single.

When Five and Thirty makes an appearance I automatically elevate this gig to one of the best of the year. The dictionary definition of ‘pure’ goes as follows…flawless, perfect, genuine, authentic, undiluted, real and actual. Gibson’s vocals elicit all these emotions.

She even drops in a John Prine cover Everyone Wants To Feel Like You, which was sublime.

As for Louis, well you could have heard a pin drop (or a mini Cheddar ).

Supporting tonight were Les Hayden, a long-haired lad who looked not unlike a young Steven Wilson from Porcupine Tree and sporting a Slayer t shirt. He played all his own compositions, and very nice they were to. The best one, Witches, contained the oft neglected word “apex” which won him over in my eyes.

We also enjoyed Melanie Page from just up the road, Loughborough. Playing some lovely guitar with flamenco flourishes and singing her lovely songs with a kind of Joni Mitchell phrasing. It was all jolly good stuff and both are recommended listening.

Tell Laura I love her.

Words by John Haylock and picture by Arthur Hughes