It seems as though every town in England is putting on showcase days to highlight the rich diversity of their eternally evolving artistic subculture. Similar events in Brighton, Manchester, Leeds and Glastonbury (the town that is) have all kicked off this year and anywhere with a few bars and galleries seem ripe for some locally sourced talent. 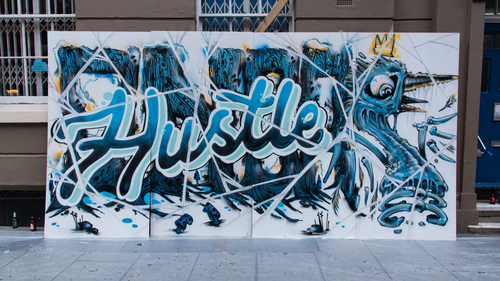 Today it’s the turn of an area in Nottingham called Hockley, a small conclave of a regenerated, previously impoverished area of the city. An area, which has transformed itself remarkably over the years to become a vibrant hub of commerce and creativity.

From early afternoon the Hockley Hustle took off,  with the area becoming a busy, heaving but happy gathering of like-minded people, fueled by enormous amounts of alcohol (sorry, that’s just me), exotic foodstuffs and good-natured camaraderie. It’s like a party but with health and safety regulators.

First port of call was the Old Angel pub where at half past three I thought I was going to see Brian Blessed. Turns out it’s a band. Ha bleedin’ ha!

In the same venue we caught some hard driving rhythm and blues from a band called Louis – think Dr Feelgood (ish). Then a young lady called Holly Taylor-Gamble and her young band sang mightily with conviction and brimstone.

I recently flagged up duo You Want Fox – featuring Colette on drums and Natalie on bass, who kick off bigtime. They are a raucous good time duo with some great sing-a-long choruses and catchy tunes. A stage invasion is actively encouraged. Brilliant.

I Am Lono got off to a good start after some interminable sound-checking, but sadly after two numbers it all went technology tits up, and they came to a faltering halt.

But hey, greatest thing ever was the Hockley Hustle set from some guys called Future Shinjuku.

My God they were good. They have a lead vocalist/guitarist who looks like Rag n Bone Man, with a similar gravelly voice, loads of echo on the riffing and a bunch of electronics from a chap with a laptop with lots of buttons on it. Warning – don’t press one like I did, he didn’t like that.

Over to El Capo bar where Inkbomb played some dramatic thrash metal. But how we ever missed a sixty-piece choir in the contemporary art gallery I’ll never know.

We then shot over to the Bodega to see what was happening – lasted one minute as we realised drum ‘n’ bass ain’t our thing.

Fire eaters, girls singing acapella on street corners, jugglers and a chap dressed as half Ziggy Stardust half Adam Ant followed. Only in Nottingham.

Our Hockley Hustle tour also took in some jazz, a bit of poetry and finished the evening in the company of The Sonics, sorry Thee Eviltones – garage rock bravado and bollocks. Totally in your face next to a plant pot. Groovy-baby, groovy-baby.