One of my favourite aspects of former Broken Family Band frontman Steven Adams’ new band is that their keyboardist Michael Wood ignored the turn-ups memo for their photo shoot. 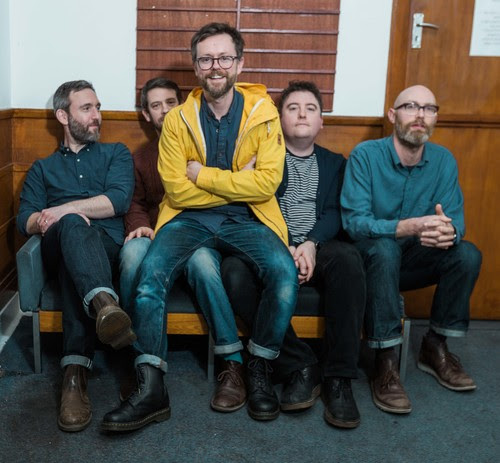 Steven Adams and the French Drops

Wood’s stand against this middle-aged fashion faux-pas is arguably the only radical departure made by Adams’ new venture, Steven Adams and the French Drops. But that’s no bad thing. If it aint’ broke… and all that.

Here Adams once again produces a collection of pleasant, well crafted songs supplemented with razor sharp witty lyrics, that rally against the injustices of the world, both big and small.

Post-Brexit vote malaise is a key concern here, with opener Bad Apples aimed squarely at the sort of patriotism that drove that surprise vote to leave Europe. Lyrics such as “lashing out” and “poisoning the well” on Wolves add further rage.

Musically, there’s less of the Broken Family Band’s country twang and as with his Singing Adams output this sounds decidedly urban, especially the smart keyboards from turn-ups maverick Wood on Free Will.

But there’s still time for melancholy and romance. Second track Paul is lovely and  as near as this the album gets to that aforementioned Broken Family Band twang. The use of this first name in the title also makes it sound much more personal and will please fans of Adams’ 2005 solo track, St Thomas, which was one of our highlights when we saw Singing Adams in Bristol back in 2012.

Imprinted is another strong love song with lyrics like “I could spend my whole life with you next to me” delivered with welcome sincerity.

Steven Adams and The French Drops are touring during May. More details here.