New Order frontman Bernard Sumner was in unusually chatty mood during his band’s 17-track long set in the stunning settings of Bristol harbourside.

Flanked by the surprisingly pictureque crescent of the Lloyds Banking Group offices to one side and the river Avon on the other,  Sumner thanked ‘Bristol’, mentioned that the weather is great. He also laughed that the next in this this open air series of gigs was going to ‘piss down’ tomorrow, and, well, actually that’s pretty much it. But for him on stage that’s pretty chatty. 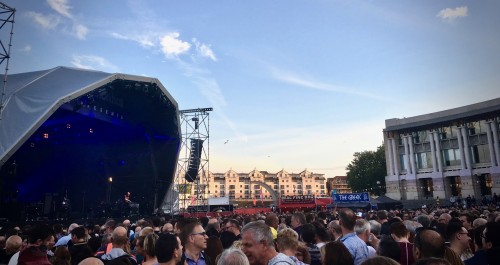 There’s no Peter Hook of course, who back catalogues New Order and their predecessor group Joy Division with his own band these days. But could New Order be better for his departure?

The tracks from their most recent, Hook-less, album Music Complete are indeed superb, as good as their ’80s hey-day. Also with a ‘normal’ bassist live it allows the tracks to come alive and not bogged down by too many intricate five strong bass melodies.

Tuttle Frutti, Restless, Plastic and Singularity were the four Music Complete tracks that were seamlessly part of their mainly greatest hits set.

This also included a mammoth five Joy Division tracks, to the delight of the very many 50-plus men in Unknown Pleasures t-shirts present. 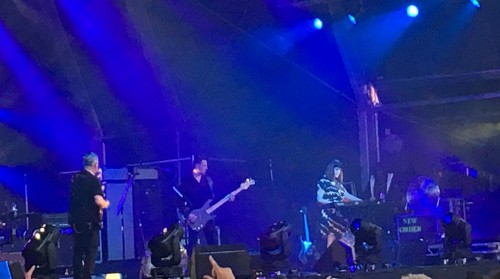 Here though he seemed to revel in New Order’s tribute to these great, late-1970s tracks.

She’s Lost Control, Shadowplay and Transmission early on in the set were beautiful, especially to hear Sumner and Morris recereating note for note and beat for beat the originals. The added keyboards filled it out well too.

The next Joy Division wave came at the end with two tracks from Closer, Decades and Love Will Tear Us Apart. The latter is actually now a festival sized sing-a-long of a track these days.

In between the old and new it was time for New Order’s top tracks to shine. Bizarre Love Triable, True Faith, Perfect Kiss, Blue Monday and Temptation were particularly good. Listening to a crowd ‘wooh-wooh’-ing and get the wrong eye colour sing-a-longs in Temptation was among many highlights.

Meanwhile Your Silent Face was, like the Joy Division covers, was a surprise treat.

Without Hook there’s no Elegia or Age of Consent, two highlights from the last time I saw them live, at the Reading Festival in 1989. But did it really matter? Watching them embrace their Joy Division past so readily, churn out their hits and showcase their fine recent work was more than enough.

A special mention also goes to the two blokes in the Lloyds offices watching in awe from their prime view, only to stop when another man came to talk to them. At least they got to enjoy most of the set.