Following the favourable global response to their debut album, The B-52’s were fast becoming one of Island’s biggest acts. For their second album slicker production was needed and Rhett Davies was brought in, with label boss Chris Blackwell moving to ‘executive producer’ duties.

Davies’ credits include albums by Genesis, Roxy Music, Robert Palmer, Brian Eno, Dire Straits and Talking Heads excellent More Songs About Buildings and Food. He was a big deal for The B-52’s. 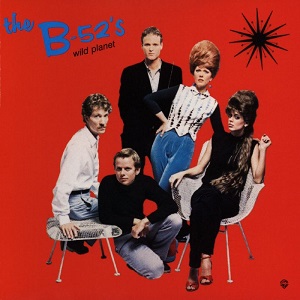 The production may have been new and slicker, but a number of the tracks had been staples of their live act for a number of years. It has been reported that the Bs had some commercial acumen at the time, wanting to hold back some of the best live songs for their second album. With top 20 album positions in the UK and US in 1980, the combination of Davies and these five camp New Wavers from Athens clearly worked.

My take on the production? I actually prefer the original’s energy and agree with Rolling Stone’s review of the time saying that it sounded ‘flatter and duller’ than its predecessor.

Nevertheless, there are some great tracks here and the production is only flatter in comparison to their fantastic debut. It’s still a great sound.

I’m going straight into Cindy Wilson’s finest moment first – Give Me Back My Man. Remember Dance This Mess Around on the debut? This takes that raw pain and emotion and switches it up a gear. A woman pleading with her man’s new woman to give him up. It’s basically Dolly Parton and great Dolly Parton at that. In desperation she tells her man’s new woman that she’ll do anything even ‘give her fish, give her candy’. Now that’s love.

Private Idaho is another high point on Wild Planet. Ricky’s intro packs a punch. It was later used as the title song for Gus Van Sant’s 1991 film My Own Private Idaho. It’s in my top five The B-52’s tracks with the intro never failing to excite.

Among the live staple party tunes is Strobe Light, Quiche Lorraine and Party Out of Bounds.

As with Give My Back My Man there are some deeper, rawer tracks too with Dirty Back Road, perhaps the best of these.

While as an album it was a hit, single wise though Davies failed to deliver, with Private Idaho the best performer in the US at 74 in the Billboard charts, although the Aussies loved it, helping it reach 11 in the charts down under.

While good, the album lacked a little of the spark of their debut but is a great collection and made a classic by Give Me Back My Man and Idaho alone.

It didn’t quite capture their live energy though and to this day I still prefer the tracks live. Just check out this awesome 1980 live version of Give Me Back My Man.

How does David Byrne fare producing the band? Find out next week when we travel forward to 1982 and Mesopotamia.