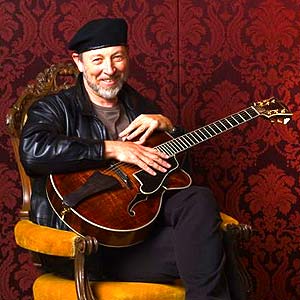 There are a lot of firsts for this box set, featuring three CDs and one DVD of Richard Thompson’s BBC sessions and live recordings from the early 1970s through to 2009.

It’s the first CD release for around 18 songs of his songs, and the first ever release of a range of acoustic and different arrangements, including a newly released version of  ‘Meet on the Ledge’ from his Fairport Convention days.

It is the first collection of BBC recordings to be sanctioned by Thompson and the DVD is the first approved by him that spans the bulk of his solo career and to feature his decade long work with his former wife Linda.

But while this box set, packaged rather nicely in a book, is certainly a must for Thompson fans it provides a more than welcome introduction to one of the UK’s greatest musicians, a true folk rock pioneer and certainly one of England’s most accomplished guitarists.

In essence the 3CDs of sessions and live recordings can be broken up nicely into three stages: his work with Linda covering the first disc, the second looking at the highs and lows of his 1980s solo work and the third focusing largely on his role as a folk music legend in the new century.

With over 80 tracks there’s a lot to take in so this segmenting works well allowing the listener to dip into say his 1980s electric guitar rock work or countrified twang of his work with Linda when the mood takes.

This segment on the second CD also follows the worst part of this collection, but that is down to my taste and dislike for this 80s rock phase. The offending two sessions are  tracks from a 1986 concert at the Hammersmith Palais that sounds like dated middle of the road rock , a little bit Waterboys, a little bit Dire Straits.  The problem is that while his fender strat work is a marvel, this type of music was not his strength. The other offender is a 1985 session for Kershaw in which tracks such as ‘You Don’t Say’ just sound like a poor man’s Police.

The first CD is also with faults. The production on the earliest sessions for John Peel is a bit ropey. Also towards the end of his partnership with Linda their performances suffer from some dated chorus effects on the guitar. Nevertheless this first disc has some of this box set’s most interesting moments, in particular versions of ‘”Dragging The River” and the excellent “Modern Woman” which have never been released before.

Perhaps the best CD for me is the third focusing on the last ten years and  featuring his renaissance as a folk legend amid a growing popularity for folk music in the new century.

This CD shows the breadth to his appeal as it features sessions for the BBC’s new music station 6Music alongside sessions for long time fan  Kershaw and veteran DJ Bob Harris. His versions of ‘Old Thames Side’ and ‘Let It Blow’ from Front Parlour Ballads, recorded for Tom Robinson on 6Music, are among my highlights. ‘Meet On The Ledge’ also provides a fitting end, originally a 1968 Fairport Convention single it is given a breath of fresh air on his Hub Session for the BBC in 2009.

What is perhaps most interesting about this box set is it shows how Thompson is such a bizarre mix of contradictions. While peculiarly English he has a distinct global outlook  and is happy to embrace different styles. He has expertly revisited and reworked traditional,  pastoral folk  but feels curiously urban and intrinsically influenced by his own London upbringing. It’s a prolific career that is far from over and given the high quality of the more recent BBC sessions in this box set, clearly still has much to offer.