Here’s the second part in our list of bands that changed our lives. These are more than just our favourite bands, these are bands that altered how we think about music and provided the soundtrack to our lives.

I don’t remember exactly what the first Camper Van Beethoven record I heard was. I think it was either the song ‘Seven Languages’ (from the beautifully titled Vampire Can Mating Oven EP) or the final album before the band split up Key Lime Pie. What I do know is that it wasn’t ‘Take the Skinheads Bowling’, the closest thing the band had to a hit. It would have been in early 1990 the year that the band was supposed to come and play in my home town, Brighton, but broke up before the end of the tour.

I was disappointed that the amazing band I had just discovered had split up sure, but this was tempered somewhat by the fact that I had found a band that matched my musical tastes so closely. There was humour in the music and as wide a variety of styles as I’d ever heard from one band. Country, punk, psychedlia, pop, ska, folk and even waltzes getting outings on their albums.

They formed in California in 1983 and released their first album, Telephone Free Landslide Victory, in 1985. Various musicians spent short stints with the band but the core of vocalist/guitarist David Lowery, bassist Victor Krummenacher, guitarist Greg Lisher, drummer Chris Pedersen and multi-instrumentalist Jonathan Segal recorded the bulk of their music and are all involved in the band today.

The band is seen by most people (out of the relatively small group that have heard of them) as being a bit of a novelty act, largely due to the success of Take the Skinheads Bowling. It is a great song and has been covered by (amongst others) Teenage Fanclub and the Manic Street Preachers, as well featuring in the film Bowling for Columbine. Delving deeper into their catalogue reveals a band of real depth and quality, in terms of song writing as well as performance.

David Lowery is my favourite lyricist, and his lyrics got better and better throughout the bands career. He is a master at producing clever and witty lines, but can also break your heart or make an astute political point as well, often all in the same song. 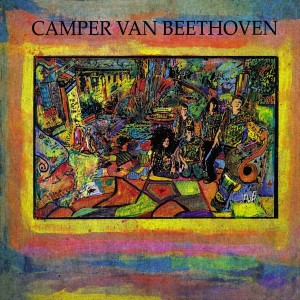 The playing on the early albums can be loose and lo-fi in places, but always fits the songs perfectly and is never less than inventive and spirited. The two albums that the band recorded for Virgin are much slicker better produced affairs, but retain the essential adventurous spirit of the band. The final album before they split still stands out for me as their greatest achievement (despite Jonathan Segal having left the band) featuring Lowery’s finest compositions including ‘Sweethearts’ which may well be the greatest song they ever recorded.

When the band split the various members kept busy for the following decade. Lowery formed Cracker as well as playing on and producing other artists, including most of the first Sparklehorse album. Segal recorded solo records and also played with Sparklehorse as part of the touring line-up. Krummenacher, Lisher and Pedersen recorded as the Monks of Doom and recorded with Eugene Chadbourne under the name Camper Van Chadbourne.

The band got back together in 2001, and recorded a version of Fleetwood Mac’s Tusk as a test of whether they could play together again. In 2004 they released their first album of new material for 15 years, New Roman Times, a brilliant concept piece about a Texan becoming disenchanted with his time in the military and becoming a terrorist. It was one of those rare moments when a band could come back together after such a long break and pick up right where they left off.

I was lucky enough to see the reunited band at London’s Queen Elizabeth Hall in 2003, fulfilling my dream from 13 years earlier. The band were older, greyer and heavier than when they broke up, but proved that they could still play the songs superbly, and the set-list was worth the wait.

No albums have come out from the band for the last 6 years, but they still play gigs regularly and I’ll just have to wait patiently for them to come to the UK or get back into the recording studio.

Picking a top ten is hard, the band has done so many amazing songs of such great variety, but here I go (in no particular order):

1. Border Ska
2. Take the Skinheads Bowling
3. We’re a Bad Trip
4. We Saw Jerry’s Daughter
5. Good Guys and Bad Guys
6. Seven Languages
7. She Divines Water
8. Sweethearts
9. All Her Favourite Fruit
10. That Gum You Like is Back in Style

If you would like to hear these songs (and a bundle more) I have put together a Spotify Playlist.

If you would like to pick up any of their albums your best bet is to get the Cigarettes and Carrot Juice box set. It contains the first three albums, the Camper Vantiquities rarities collection plus a live disc composed mainly of tracks from the two virgin albums. The two Virgin albums are essential buys as well, and the reformation album, New Roman Times, is a sensational comeback. If you just want to dip in, then the best-of collection, Popular Songs, is an excellent selection, although all songs from the Virgin era have been rerecorded specially. Only completists need venture near their cover of the entirety of Fleetwood Mac’s Tusk, or the patchy Camper Van Beethoven is Dead oddities collection.