It has been 27 years since Dexys Midnight Runners last released an album and 24 since Kevin Rowland last issued any original material (bar a couple of songs in 2003), so the opportunity to hear Dexys (the name of the band since 2003) play their new album in its entirety was too good to miss. Rowland is held in such high regard today ( a far cry from when he released the much derided My Beauty  in 1999) and the whole show was a display of his confidence and assurance in himself and his songs. 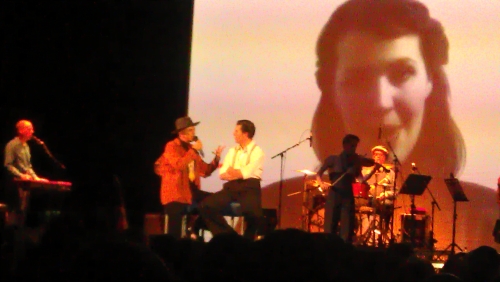 The first hour or so was devoted to playing the new album, One Day I’m Going To Soar, in full and this section of the evening worked surprisingly well considering the audience was only familiar with one or two of the songs on offer. The sound is typically Dexys, the fiddle, the soul and Rowland’s unmistakable voice, surprisingly strong after all these years. The songs, largely built around the keyboards of veteran fingersmith Mick Talbot,  don’t have quite the same urgency as his bands original work. Anyone expecting the arrogant impact of ‘Burn It Down’ might be a little disappointed but this is not the same band, and it is a more mature Dexys on the stage.

The songs are surrounded by a strange kind of theater with conversations and characters appearing in and around the songs, something that highlights the lyrical directness and simplicity.  There is no mistaking what Rowland is thinking and saying in these songs, if he wants to talk about how he is incapable of love he’ll write a song called ‘Incapable of Love’. These elements do take a little bit of time to get used to, but certainly help to lift the performance to a level above just being a pop concert.

The second half of the set was devoted to playing tracks from the back catalogue and this is when the crowd (appreciative but reserved in the first half) really started to get into it. It is notable that Big Jim Patterson’s trombone solo on one track got as big an ovation as any of the new material.

Even when playing the old songs this was not a greatest hits set, with only ‘Come On Eileen’ (a popular if over long rendition) being one of their hit singles. All three of the original albums were represented with ‘Tell me When My Light Turns Green’ and a closing rendition of ‘This Is What She’s Like’ getting a particularly good response from the audience (who by this time were ignoring the stewards and dancing in the aisles).

This was an enjoyable, entertaining and high quality show, no question and all the reviews of the set I have read today have raved about it. I feel a need to offer a little balance, as this was not a perfect event and some odd decisions were made by the band and the venue.

The idea was clearly to make this a theater event, all seated (apart from this at the back of the auditorium) and no direct audience communication to break from the show. The problem here was that even though the songs were played at a slower tempo than in the past they are still up-tempo dance songs. Listening to them in a seat for two hours seemed uncomfortable and stifled the atmosphere at first. The bar was also closed before the band came on stage and remained shut until, after the performance which left me without a drink for most of the evening. I can go two hours without a drink, and I was glad this wasn’t just a greatest hits knees-up, but this is enjoyable pop music and the reverence seemed odd.

These are minor quibbles though and it was a unique musical experience and one that proved (if proof was needed) that Rowland was still a great performer and songwriter. I look forward to hearing the album on record and hope that it doesn’t take him 27 years to wrote another one.