When I reviewed Shake The Darkness, The Mojo Fins album from the middle of last year, I wanted the band to rough things up a bit and explore a more natural sound. Their new release, The Spirit EP (again recorded by Dave Eringa), hardly sounds like a garage recording but it does have a more organic sound. This sound, with simpler arrangements than on the album, suits their songs better and is a definite step forward. 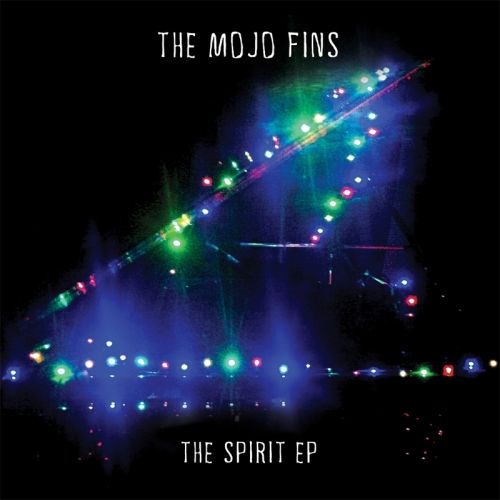 The songs also have more of a hook than before, although we aren’t talking about three minute pop songs here. The band still want to produce a big anthemic sound, but the songs are more memorable and have stronger melodies this time around.

Title track ‘Sweet Spirit’ starts things off perfectly with some beautifully picked folky acoustic guitar and brushed drums before the instruments build up and multi-tracked vocals come in. ‘Palace of Memory’ opens with haunting echoed piano before some more exquisitely played acoustic guitar comes in behind the records most restrained and strongest vocal performance. It is also the EPs best tune and most memorable chorus.

‘K2’ is folkier still and benefits from a musical space that was perhaps lacking on the band’s last long player. Just when you’d expect the song to kick in with a wash of instruments it doesn’t; instead we get restrained drums and more picked guitar. ‘When I Go’ finishes the EP in similar style, keyboards and electric guitar building the sound back to a sound more like the opening track, and it is a satisfying finish to a strong set of songs.

Other reviews of the band have used the dreaded “c” word, Coldplay. As with other examples (Milagres, one of my favourite acts from The Great Escape spring to mind) this is not really a fair or accurate comparison, and a bit of a lazy one. The similarities start and end with the production values and (at a push) the vocal style. The arrangements, playing and songs owe little to Chris Martin’s band of stadium bores. In fact it sounds a lot more like Prefab Sprout, and that (intentional or otherwise) is a far worthier source of inspiration.

I’d still like to hear the band rough things up a bit, and maybe look at a producer who, for want of a better word, “produces” less. However, this EP is a real step forward and contains some of the best music the band have put on record to date.

The Mojo Fins play at The Concorde 2 this Wednesday supported by Thomas White, Forestears and Bat County. Details on the Facebook event page.