When The Miserable Rich take the stage at Brighton’s Dome Studio Theatre it is a bittersweet event for the home crowd who have ventured out into the cold to see the band play. You know that a great show is in the offing, but there is also the knowledge that this is the band’s last show, if not for ever, for a long time. 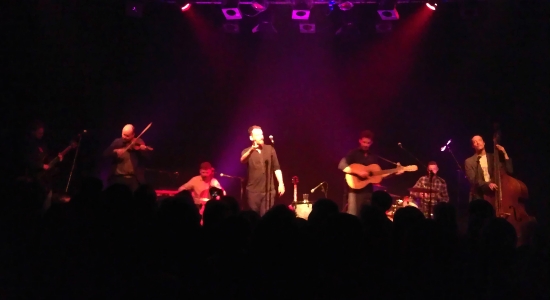 Since I first heard the band in session playing ‘Boat Song’ on Marc Riley’s 6 Music show I have managed to see them seven times in total. This may not seem a lot to the kind of people that obsessively follow their favourite acts, but I have always loved variety and seldom see anyone play that often. It also occurs to me that I have seen them play in a wider variety of venues than any other act.

The significant point about all the shows being that they all had a different feel, but were all a brilliantly performed showcase of great tunes, the final night being no different.

The set-list picked pretty evenly between the band’s three albums, the quality mark being so high that it is hard to pick out highlights from the set. ‘Ringing The Changes’ was memorable as James de Malplaquet forgot the words, not once but twice, and the rendition of ‘Boat Song’ played (as has become tradition) from within the audience was a fitting finale. Also notable was a version of Donna Summer’s ‘I Feel Love’ that sits in nicely with the band’s other excellent cover choices through their time together.

The band were joined on stage for about half the set by their original guitarist Jim Briffet, boosted to a seven piece from their original five member line-up. One of the great skills of the band is their ability to move between big sounds and delicate moments, sometimes several times within a song.

The band are officially on hiatus, the members pursuing alternative musical endeavors for the time being. The good news here is that there are several great new acts that could rise from the ashes of the band in the next few years. I hope that they do reunite at some point in the future, the prospect of a forth album and more shows is certainly something I would welcome. If, however, this really is the last we’ll see of them then at least I have been lucky enough to enjoy them more than most.