When the likes of Joe Strummer and Paul Weller sung about police brutality and racism in their late 1970s and early 1980s heyday thousands took notice.

But when National Wake, a multi-racial punk band in Apartheid era South Africa, sung about these themes there is an extra resonance. Here was a band that was often banned from playing live, had first hand experience of police oppression and lived in one of the most brutal and unjust societies of the modern era.  Those that managed to see them were enthralled, but the wider world never even knew they existed. 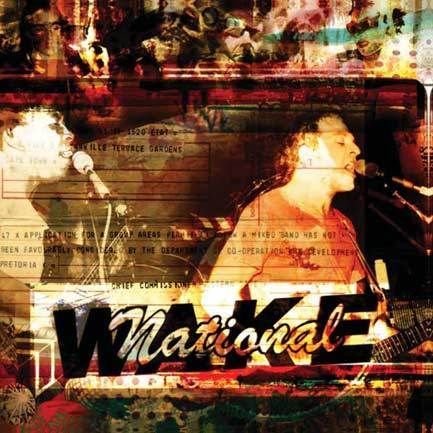 National Wake were formed in 1978, two years after the Soweto uprising,  and at it’s core were Ivan Kadey, an architecture student with a protest singing and folk music background and brothers Gary and Punka Khoza, who played bass and drums respectively on the township soul and funk circuit.

Taking those protest folk and soul influences, combining them with rock and punk as well as reggae they created something that was wholly unique. At times its Bob Marley, at others Talking Heads with elements of The Clash and Funkadelic entering the mix. It was a superb combination that begs the question were they influenced by the music around them or were the likes of Talking Heads influenced by them?

Joined by additional members at various times: including percussionist ‘One Eyed’ Mike Lebisi; lead guitarist Paul Giraud; saxophonist Kelly Petland and slide guitarist Steve Moni, they were highly accomplished musicians and that shines through just as strongly as the protest lyrics on their only album, 1981’s National Wake. 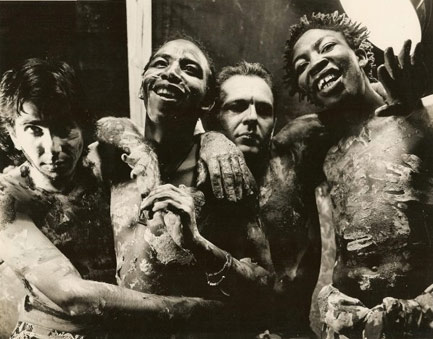 I’ve only discovered them this year, through talk on the internet about the recent Punk in Africa documentary. This wonderful mixtape of the era was also enough convince me to buy the 2011 reissue of National Wake. It’s an album that has taken me by surprise. Not only is it surprising to someone brought up on UK and US punk bands to find out that South Africa had a punk scene at all during Apartheid, but its also a surprise at just how good this remastered version of this once forgotten album is.

Musically its as good if not better than many of UK and US new wave and punk bands we’ve already mentioned, opening with Wake Of The Nation, with prog rock guitar solo merging effortlessly into a soul funk rhythm that Weller would have welcomed with open arms to The Jam’s Gift album. The Saxophone and guitar solos are particularly effective but the lyrics shine brightest, “this is the wake of the nation as we smash it away.”

International News is another punk influenced track, combining the innovative world music view of Talking Heads with the social commentary of Strummer perfectly with its superb opening riff jerking among the percussion on a track about government censorship and the struggle of South Africans to tell the world and each other about their plight. The heavy South African accent on the “International News” chorus adds to the weight of this song. Even the fast pace of the song conveys the threat of government oppression.  In this Afro-pop interview with Kadey, he explains “there’s a sense of urgency to get this out before it gets shut down.”

The “Keep on moving, keep on fighting chorus” on Supaman, one of many Bob Marley influenced tracks, is the most emotional moment on the album. No matter what is being thrown at them the fight is worth it. There’s an added dignity to this song as Gary and Punka’s brother had been the victim of a brutal police attack. This track should have been played as Nelson Mendela took office when Apartheid was eventually dismantled.

The final track, a live version of Black Punk Rockers, is added to the reissue, and is the most overtly punk song on the album. But around half way through the band’s individualism comes through with one of the best drum and percussion solos in rock  brilliantly placed between the fierce major bar chords.

National Wake was originally released by WEA in South Africa. But following pressure from the South African government due to its overtly political lyrics it was effectively shelved.

Touring was also difficult for the band. Their Riot Rock tour with other South African new wave bands such as Safari Suits in 1979 was marred by venues refusing to allow a multi-racial band to play. They instead retreated out of the cities into township discos and small rural venues to find an audience. In the end they dissolved shortly after their album was shelved.

As for the band members they stayed within the South African music scene where they continued to influence other artists.  Kadey co-founded the record label Shifty Music and helped build its mobile studio using some of the National Wake’s sound equipment. Among those to use it was Warrick Sony of Kalahari Surfers. The Khoza brothers stayed within Johannesburg’s Rockey Street alternative scene, which featured a number of multi-racial bands, given confidence to play together by the trailblazing National Wake.

Apartheid may have ended but their lyrics of struggle and yearning for freedom are still pertinent globally and across South Africa. This is what makes the album far more than an historical artefact and we believe an essential item in any music collection.

National Wake is available direct from South African label  Fresh Music here  or to download from iTtunes or Amazon.