There was a list of words I was going to try to avoid when writing about the Still Corners gig at XOYO on Thursday night. Words such as ‘dreamy’ ‘psychedelic’ and ‘ethereal’. But I’m going to concede defeat upfront.

Because it’s hard to describe this dreampop act any other way. It’s all so very dreamy and ethereal, helped along by barely-there, lilting vocals. It’s hazy and fuzzy-edged, and can make the unsuspecting listener feel just a little bit light-headed. 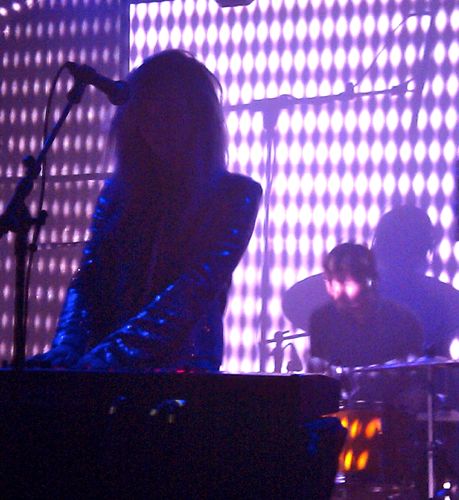 Still Corners is songwriter and producer Greg Hughes and singer Tessa Murray. My introduction to the band was with their 2010 7-inch that included the wistful ‘Wish’ and the heady, breathy ‘Don’t fall in love’ (which I promptly fell in love with). I loved their 1960s sound, their psychedelic twanginess.

That doesn’t come through quite as strong in their new album Strange Pleasures, which sounds a bit more produced, more worked on, with lots of layers and electronics. At times it comes close to the excellent soundtrack to the Ryan Gosling film, Drive, which includes College ft. Electric Youth’s awesome song A Real Hero (Further reading has revealed that quite a few people have drawn parallels between Still Corners and the Drive soundtrack, so it’s clearly struck a chord).

Thursday night’s gig was dark and atmospheric and got underway with a rising sun visual projected on to the screen backdrop. Oh dear.  But the audience soon had its sway on, and gave over to the shadowy, pseudo-mysteriousness of the frontwoman in the sparkly, sequinned jacket and the preppy American at her side.

Highlights for me were Wish, Endless Summer, and Cuckoo. Lovely songs. Beatcity was also a standout. There is a danger that the songs can start to sound a wee bit the same, but then every time I felt that they were tending towards the monotonous, they ramped the reverb up to 11, to an overwhelming wall of sound and distortion to finish on. They pulled focus. I liked it.

A small bias I have – I saw Beach House at Primavera Sound last year, and for me, they’ve got dreampop covered. Bloom was one of my favourite albums of 2012. Victoria Legrand is a more commanding presence on stage too, her voice darker and more intense, focussed. Murray is breathier, prettier and a bit – chilly. They also come across a bit distant and emotionless, but then maybe that’s the point.

In all, a really good gig. Still Corners are hugely listenable, and just as much so live. Their music is something to be enjoyed through a haze of intoxication – or, at any rate, it will make you feel intoxicated, so you might as well meet them there.

It should be noted that support act, Woman’s Hour, were brilliant. They dished out a haunting, stripped-back version of Springsteen’s Dancing in the Dark that was a real spinetingler.