The slightly strangely named Bearded Theory festival celebrated the occasion of its sixth birthday by throwing a mad party in the grounds of the splendid magnificence of Kedelston hall, just outside Derby.

Three days of musical merriement and happy vibes were guaranteed, and I know you may find this hard to believe, but on the Sunday we had wall to wall sunshine, which matched perfectly the wall to wall smiles of the very, very happy festival goers.

Unfortunately due to circumstances beyond our control (yes, work, i’m looking at you !) this mini review will concentrate solely on the Sunday, don’t worry it was brilliant. 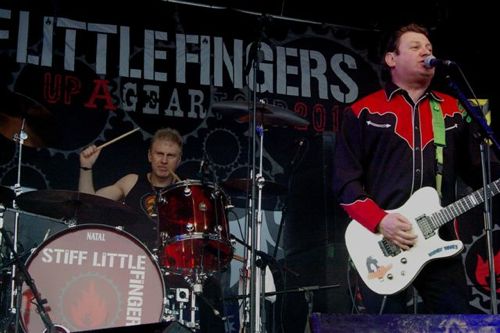 In a relatively small area, the organisers had constructed a mini-Glastonbury, all very accesible, no long treks and with multiple stages, stalls, rides, entertainments and the proverbial beer tents it proved a joy to walk around. On an afternoon of unbroken sunshine we came across all sorts of diversions, including at various times, two cardboard robots, a man with an unhealthy interest in the history of the swastika, Noel Coward, the worlds loneliest fairground ride attendant, some of the biggest wooden cocks it has ever been my misfortune to see on a craft stall, more beards than a Z Z  Top convention and a gang of can can dancers, some of whom were women.

Among  the musical highlights were Stiff Little Fingers, who tore up the main stage especially with their opening broadside of Alternative Ulster, a screaming burst of righteous anger. Goldblade with the uncontrollable John Robb at the helm proved just as volatile. 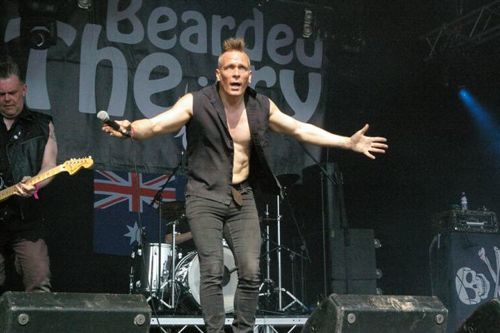 Mid afternoon saw the arrival on platform 5 of the groovy train , driven by Liverpool’s The Farm, yes  they’re still going strong, all together now and  they were awesome.

In a tiny tent we witnessed the arrival of a talented young lady by the name of Lucy Ward, a local lass with a cracking voice and a wonderfully down to earth attitude, she was a bubbling volcano of folk lava and performed a new tune called Icarus which was stunning.

Also appearing on the Sunday was The Men Who Will Not Be Blamed For Nothing, a band who seemingly emerged from a faulty time machine and billed as purveyors of ‘steampunk’. Imagine if you will a cross between Metallica and Isambard Kingdom Brunel. They were the most original, funny and clever band I’ve seen since the Crimean war, with songs about whores, Nicholas Tesla, Robert Louis Stephenson and Cthulhu. They made my day. 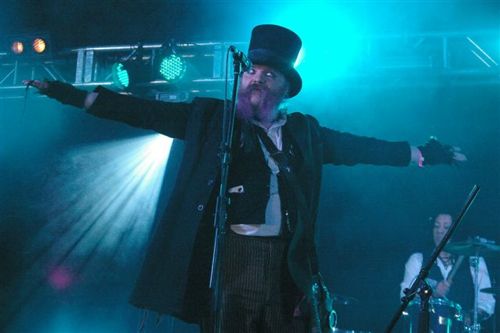 The Men Who Will Not Be Blamed For Nothing

Mind you, the headliners The Levellers weren’t bad either. You might think that after two decades their popularity and enthusiasm may have evaporated but nothing could be further from the truth. They rocked the main stage for a solid ninety minutes, the crowd loved them and it was one big love fest. Those tunes from their album Levelling the Land are going to be standards forever; folk tunes for a generation of dreamers. God bless ‘em.

So we say a beardy  farewell to the first big festy of 2013, and look forward to next year’s close shave