The relatively low profile of Neko Case is something of  a mystery. She is undoubtedly the owner of one of the best voices in modern music, a voice that is equally comfortable with country, ballads and pure pop music (watch this video of ‘Crash Years‘ by the new Pornographers for evidence of that). On the evidence of tonight’s show she is a brilliant live performer with an extremely strong back catalogue, and some excellent sounding new songs coming on her next album. By rights she should be challenging Adele in album sales, but she remains a popular but relatively niche attraction. 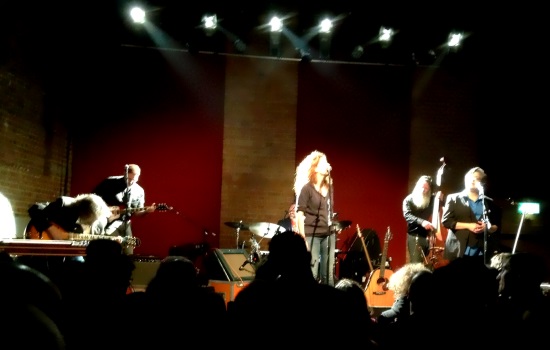 The Village Underground in Shoreditch, a new venue to me, is packed and expectant when Case and her impressively bearded band hit the stage. It has been four years since she released and album, and although I don’t know how long it has been since she last played in England, this seemed like a big event. From the first song it is wonderful stuff, her voice (complimented perfectly by the backing vocals of Kelly Hogan) is pitch perfect throughout and the song choices are exactly what I wanted.

Songs are largely plucked from her last the albums, the majority from Fox Confessor Brings the Flood and Middle Cyclone, with three very promising cuts from her forthcoming album. Her voice is such a powerful instrument that it is sometimes easy to forget the quality of the songs she is singing. ‘I Wish I Was The Moon’, ‘Hold On’ and ‘People Got A Lot Of Nerve’ are just three of the songs from a packed set that rivals any artists for quality of lyrics, melody and vocal performance.

Case and Hogan are also very engaging and amusing hosts for the evening, their irreverent between song  chat being frequently hilarious, be they discussing the best places to go in order to catch the menopause or Hogan’s improvised song ‘Remembering’, as they ask the crowd to watch rather than film the show. And when Hogan mentions a dream she had where her vagina was full of silicate, or Case’s claim that her vagina ate her bikini bottoms, you know that it is going to be a memorable evening.

I could go on at length about how much I enjoyed the show, and what a wonderful gift Neko Case’s voice is to the world,  but my fan-boy rambling would get tired pretty quickly. Shows later this year, in support of the new album, are promised and I urge you to buy tickets the day they go on sale, you’ll not regret it.